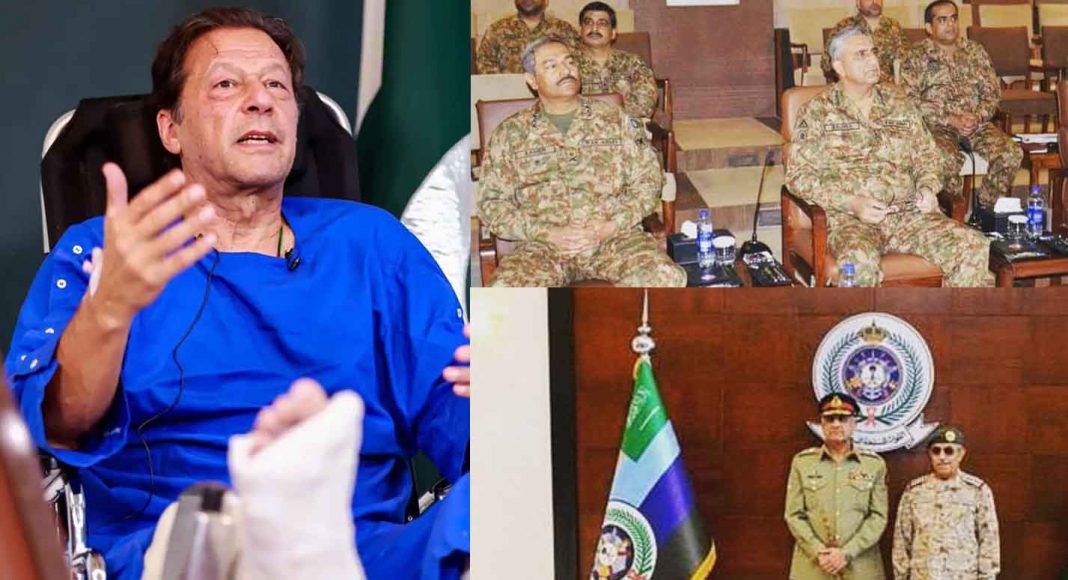 The PTI leader claims that Nawaz and his offspring no longer have any ties to Pakistan because they now reside abroad.

When ex-prime minister Imran Khan spoke at the Mandi Bahauddin rally for his party, the Pakistan Tehreek-e-Insaf (PTI), he stressed that the PTI’s policy was not to make enemies of anyone but rather to not be slaves to any country.

The former prime minister’s comments were made in the midst of a stir within the government following an interview with the Financial Times, in which he claimed to have put the “US conspiracy” controversy to rest.

“No sane person seeks out adversaries.” “We have no interest in serving as anyone’s slaves,” the PTI leader said at today’s rally.

A propaganda cell is providing journalists with information. “They take what I say and twist it around on purpose,” Imran said, adding that the NSC, parliament, and the president all had the cypher.

What is the problem exactly? He elaborated, “When we say we are progressing, it means we want good relationships.”

Imran said we’ve reached a level of reporting where even international reporters need to clarify their stories. The PTI leader had previously said that until there was a rule of law, the country could not advance.

In today’s world, everywhere the rule of law is established, it tends to be the most prosperous place to live. On the other hand, Pakistan is ranked a dismal 129th in terms of the rule of law. But if that’s the case, then how do we expect this nation to thrive? It’s impossible!

The party chief went on to say that the PTI’s long march stands for the rule of law because it will help the country develop and give the people “real freedom.”

“We seek a government based on the rule of law.” If a former prime minister is unable to obtain a FIR register, as he claims, then… In accordance with the Constitution, I must report this incident. When asked about the FIR filed in connection with the Wazirabad attack, he said, “But I was unable to register it.”

“If I were treated like this,” he continued, “then God help the average citizen in this country.”

Imran criticised Prime Minister Shehbaz Sharif and his brother, Pakistan Muslim League-Nawaz (PML-N) supremo Nawaz Sharif, once again over the appointment of a new army chief, asking how PM Shehbaz could consult with “a convict.”

“The Official Secrets Act has been broken.” We’ll talk it over with the legal team. “How can he discuss such a major matter with an escaped convict and an armed robber?” “This,” he said.

The leader of the PTI argued that Nawaz was not qualified to offer an opinion on such a crucial issue because he and his family were no longer residents of Pakistan.

As a nation, we are with Imran.

Earlier, PTI senior leader Asad Umar said that “important decisions are being taken in London,” prompting the country to rally behind former prime minister Imran Khan for its “real freedom.”

After 75 years, the British are still making important decisions about Pakistan from their base in London. This is why the people have rallied around their captain in support of “Haqeeri Azadi,” he said.

Sajjad Ahmed - November 15, 2019
HBL PSL 2020 player registration/retention/combination/draft. The preliminary list is shared with names expected to be added over the next week Players can be retained, traded or...