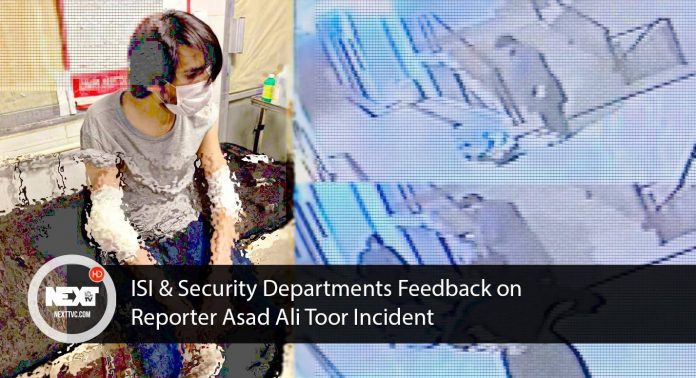 The Inter-Services Intelligence (ISI) in a high-level communication with the Ministry of Information and Broadcasting on Saturday completely disassociated itself from the fresh incident in which digital media journalist Asad Ali Toor was purportedly tortured at his Islamabad facility.

According to a press release by the Ministry of Information, the allegations against the ISI were part of the “fifth generation warfare under a well-thought-out conspiracy”.

The ISI believed that the investigations should go ahead as the faces of the accused can be seen clearly in CCTV footage and stern action should be taken against the culprits involved in the incident, read the statement.

“The ISI assured full cooperation with the investigating agencies in this regard. The Ministry of Information was in close touch with the Islamabad Police and hoped that the accused would be apprehended soon,” it added.

The practice of leveling charges against the institutions sans any supporting evidence should end now as such negative inclinations were part of a conspiracy against the country’s institutions. They [ISI] expressed firm concluded that the real culprits would be presented soon, the announcement said.

Asad was reportedly attacked in Islamabad late Tuesday (May 25) as the attackers broke into his house and physically assaulted him.

An investigation team led by the SSP Investigation would look into all phases of the case.

IG Rehman had directed the investigation team to use all scientific and forensic methods to trace the accused involved in the incident.

“With the help of CCTV footage, Safe City cameras and human resources{HR), those responsible should be placed as soon as possible,”the Islamabad IG had stated.

So how do you beat a fifth-gen enemy? By not fighting, first of all. Beebe says ending the vortex of violence in Africa means alleviating “the conditions of human beings that create these insecurities across state borders.” In other words, focus on economic development, humanitarian assistance, and communication with nary an M-16 or Abrams tank insight.

In Coer’s words, “success will vary inversely to exported violence.”

This statement doesn’t apply to the United States.

Domestically, the decades of zero return on investment assistant have proven this doesn’t work. There is no privilege making these people happy. This also leaves out the majestic role that social media plays.

Such a solution is hinged solely upon the implementation of foreign aid- in short, we created your economic problem, your people revolted (which we helped them do) and now you’ll give us whatever economic goals we want, to make all this go apart.