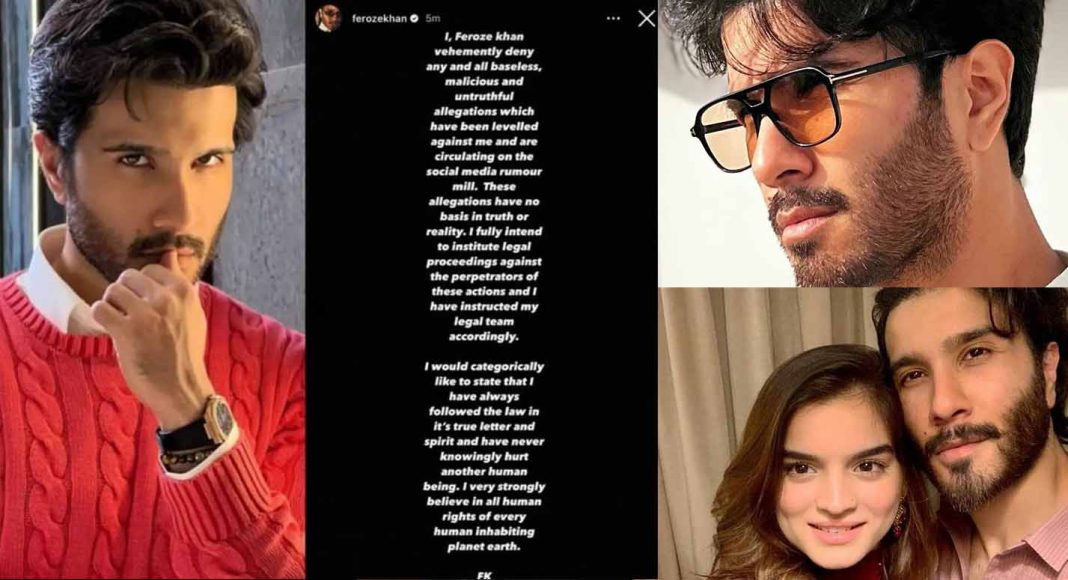 Cast members respond to the shocking and upsetting claims of abuse against Feroze.

Musadiq Malek, who directed the drama serial "Habs," and his co-star Dania Enwer were among those who stood in support of Aliza Khan.

After Syeda Aliza Sultan said in court that her ex-husband Feroze Khan hurt her physically, many famous people, including Feroze’s co-stars, spoke out against domestic violence on different social media sites.

A lot of people have told Aliza they’re rooting for her and raising awareness about the plight of trauma survivors. Actress Ushna Shah, who co-stars with Feroze in Habs, has spoken out about her “horror” at the revelation. The star of Baaghi took to Twitter to express her admiration for Aliza. What did she say? “I’m still reeling from the shock and disbelief of this. Abuse of any kind is unacceptable, especially against women. “

The drama’s director, Musaddiq Malek, has been very forthright in calling Feroze a “self-centered” and “egoistic” man while pleading with viewers to keep tuning in. He posted a message to Instagram reading, “Most challenging Habs upload ever. Forty people toiled through over a hundred days of hard, sweat-filled effort to put on a show. We must not allow one foolish, vain, and egocentric individual to spoil this for everyone. “

Right after that, the director emphasized the need to “separate the art from the artist.” After Malek called Feroze an “a**hole,” he apparently had his account terminated. Dania Enwer, who was asked to speak about her tense relationship with Feroze on the Habs set, finally did so after numerous demands.

She mentioned it in her Instagram story, “Though I had never met him before this project, his comments about women were offensive and demeaning. It was difficult to handle, and the last day I spent filming with him was the worst. “

Feroze has denied all of the accusations of abuse against him, and more celebrities are speaking out against the fact that people in Pakistan don’t have to answer for domestic violence.

Sajjad Ahmed - August 31, 2020
Being an IT Businessman Parmarth Mori is an extraordinary Tech Entrepreneur who consistently impacts New Technologies in Gujarat India. A youthful Tech Entrepreneur from Wadhwan...