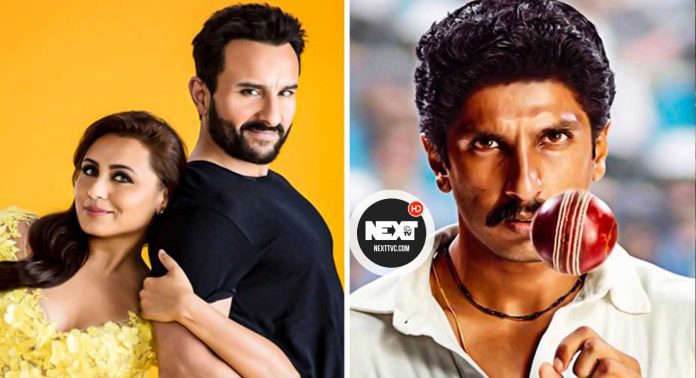 Bunty Aur Babli 2 is an out and out entertainer and would make for an ideal watch on festive season and YRF is strongly considering a December release for the film featuring Siddhant Chaturvedi, Saif Ali Khan and Rani Mukherjee. Aditya Chopra has been closely working in tandem with Reliance to chalk out his release calendar as he understands the efforts taken by Reliance to hold on to 2 big films – Sooryavanshi and 83 for a theatrical release. He is in no mood to clash in the midst of pandemic and has decided to bring a YRF film on Diwali only because 83, Sooryavanshi or any other film is not releasing,”

With cinema halls finally reopening in Maharashtra, thereby practically in almost whole of India, Bollywood will now get back on track by having a slate of releases in place before the year ends. In an interview, Reliance Entertainment CEO, Shibashish Sarkar confirmed that the much awaited Kapil Dev Biopic, 83 starring Ranveer Singh in lead won’t release during the Christmas weekend, and would instead arrive in the first quarter of 2021.we discovered that the Christmas weekend might be taken over by Yash Raj Films now as they are planning to bring their comedy, Bunty Aur Babli 2 during the festive weekend.

A final call on release of Bunty Aur Babli 2 will however be taken by end of this month considering how things are on-ground, the ticket sales, the cinema consumption pattern, as also after analysing the possibility of a second lockdown in some parts of India. “The film will release only if all the key markets are open for exhibition. With 83 taking a step back, Christmas is on Adi’s mind for this film. He has seen some rushes and is confident that the nostalgia factor backed with freshness in the screenplay of sequel will draw audience to the cinema halls. He is ensuring a merry Christmas for exhibitors with Bunty Aur Babli 2.”

83 and Sooryavanshi on the other hand are looking to release in between January and March, and a final call on the release will be taken after the stakeholders analyse the performance of some films that release in the next 40 days. “They are big films and need to record big footfalls to break even. Hence, it would be a properly planned release taking into account all factors including the overseas markets.” The other YRF films looking for a release in next few months include Jayeshbhai Jordaar, Shamshera and Sandeep Aur Pinky Faraar.