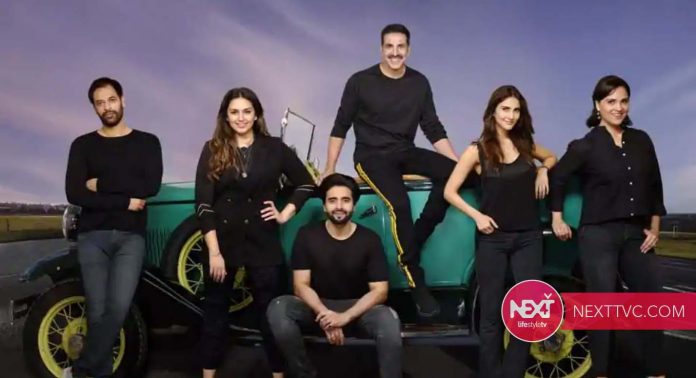 Bell Bottom is an espionage thriller and will be set in the 1980s. The film is about one of India’s forgotten heroes and will have Vaani as the female lead opposite Akshay. Directed by Ranjit M Tewari and written by Aseem Arrora and Parveez Shaikh, the film is scheduled to release on April 2, 2021.

Akshay Kumar’s upcoming film Bell Bottom will be among the first films to begin shooting post lockdown. The entire cast of the film including Vaani Kapoor, Huma Qureshi and Lara Dutta will head to the UK in August for the shoot.

The makers shared a new picture to announce the same. It shows Akshay sitting over a vintage luxury car and the three female actors Vaani, Huma and Qureshi standing beside it. Producer Jackky Bhagnani is seen sitting on the footstep of the car.

Talking about working with Akshay for the first time, Vaani said, “I am excited to share the screen space with Akshay Sir. It is definitely a script I instantly clicked with and knew I wanted to be part of. I am also thrilled to partner with Pooja Entertainment who have already made me feel at home at this initial stage of our film. I’m eagerly waiting to start shooting Bellbottom.”

The film is being produced by Vashu Bhagnani, Jackky Bhagnani, Deepshikha Deshmukh, Monisha Advani, Madhu Bhojwani and Nikkhil Advani under the banner of Pooja Entertainment, in association with Emmay Entertainment.