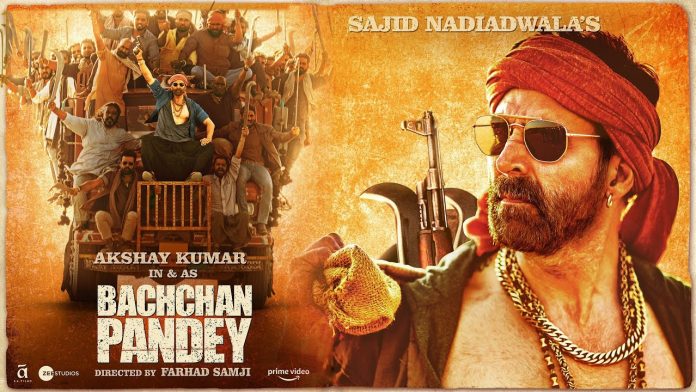 Bachchhan Paandey Movie Review : The film is a jumbled mass of wacky and uninspired characters.

If you’re looking for a traditional masala film, this is the one for you. Others, stay away! As a bonus point, the film has the slogan, “Holi pe goli.” However, you will undoubtedly need ‘a headache ki goli’ after seeing the flick.

In the last several years, the substance of films has experienced a dramatic shift. In Hindi cinema, it seems that the days of a huge star guaranteeing box office success are long gone. In spite of the fact that we’ve grown up on a diet of Indian food, we’ve developed a taste for other cuisines—including those from Italy, China, Thailand, and Mexico.

Having Bachchan Pandey as a companion is like going to a luxury restaurant expecting to be given a lavish dinner, only to get vada-pav instead. It’s as though Bachchan Pandey didn’t pause to think about whether or not the mixture truly worked before cramming in all the other parts.

There is no rhyme or reason to the blood and gore in this picture, which stars Akshay Kumar, Kriti Sanon, Arshad Warsi, and Jacqueline Fernandez. It is a throwback to the nonsensical scenarios, blood, and gore of the 80s and 90s Bollywood. My apologies, the formula is no longer applicable.

In all seriousness, what was Farhad Samji’s goal in writing this sloppy script? Masala films of the past may be referenced, but a fresh interpretation needs to be modern and relevant to today’s audiences. Too many chefs are said to ruin the soup. The film is muddled with a poor narrative laced with pointless detours, penned by six different authors.

Gaddalakonda Ganesh, the Telugu version of the Tamil classic ‘Jigarthanda,’ borrows extensively from this premise. An associate director who desires to be a major director is the gist of the story. She makes the decision to direct a film about a thug. Bachchan Pandey, a vicious mobster, is the one he discovers while looking for a gangster.

What you learn from the movie is that no amount of glitz, glitter, and A-list talent can ever replace a strong story. In order for a film to be successful, it must have a brilliant story and a stellar cast. It’s certainly cost lakhs to put together every frame of the picture, but the tale doesn’t stand up in the end, despite the glossy finish camerawork, exotic settings, and costly costumes.

In order to get the most enjoyment out of this film, you need to organize your expectations. Let’s face it: There’s nothing new about what happens. If you like either action movies or comedies, you’ll have a good time. Only Warsi stands out among the rest of the cast. In the end, it’s all about the laughs he provides. He really is a delight. Sanon also performs a good job and is given a lot of screen time. She and Warsi’s joking around are the film’s most memorable moments. His place in the backseat has been taken by Fernandez.

Akshay Kumar plays a part that is tailor-made for him, and he does it with aplomb. The film provides him with several chances to show off all of his abilities. This freak show is going to be a blast for his admirers.

Kartik Aaryan's good looks and acting skills make him one of...

Shan Masood, a Pakistani cricketer, and Nische Khan were photographed for...

"I watched a girl being bullied. I don't want to share...

Rajamouli spoke to the international publication The Hollywood Reporter about RRR's...