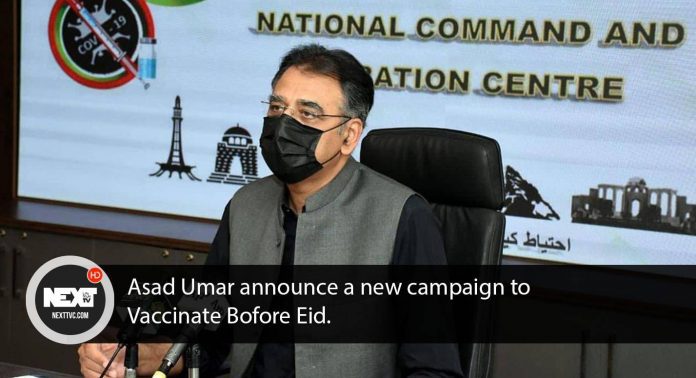 The head of the National Command and Operation Centre (NCOC) Asad Umar said that the government will launch a major campaign to make sure that the Coronavirus vaccine reaches the entire population.

Umar spoke about the government’s plan to launch the campaign while addressing a press conference in Islamabad after attending a meeting of the National Coordination Committee (NCC) chaired by Prime Minister Imran Khan that reviewed the coronavirus situation in the country.

The federal minister for planning said that the restrictions introduced by the government before Eid had paid dividends as the positivity rate was declining.

He explained that the restrictions were a “defensive action” and affects the livelihood of the people, adding that the only way out of the current situation was to get vaccinated.

Asad Umar said that the government is hoping to get enough people vaccinated by Eid-ul-Azha so that there is no need to impose restrictions as they did on Eid-ul-Fitr.

To that end, the minister said that the government is shifting from the “whole of government approach” to a “whole of nation approach”.

Umar said that under the whole of government approach “all departments, be it federal or provincial, are working together” against COVID-19.

“The next stage that we are going to is called the whole of nation approach,” said Umar.

He added that this means that the “whole nation has to work together” for the vaccination drive.

“To make sure that the vaccine reaches everyone, we are launching a major campaign,” said Umar.

The minister said that as the first step, the National Command and Operation Centre (NCOC) will hold a meeting with media owners and anchors tomorrow.”We will take [media’s] help first in the campaign. Media played a positive role when coronavirus was first reported. Like this, we want a big vaccination campaign focusing on why vaccination is necessary,” said the NCOC chief.

Umar said that the day after tomorrow, the NCOC will invite Pakistan’s leading business forums and ask them to join the government’s work.”We will tell them how we want their help. We do not want their money, we will give them vaccines and through them, we will try to vaccinate their employees and their families,” said the NCOC chief.

He also added that after reaching out to their people, the government will use their hospitals and mobile teams to reach the common man.

In the next step of the campaign, the minister said that the government will reach out to the religious scholars of the country.

“We have requested President Arif Alvi to call a meeting of religious scholars and make sure the message reaches every Pakistani, that taking care of your health is in your religion,” said Umar.

He also shared that the government will reach out to the bar councils and journalist organizations as well.

“In today’s meeting NCC approved this strategy of ours but this strategy will be successful not because of the NCC but when everyone, as a Pakistani, plays their part,” said Umar