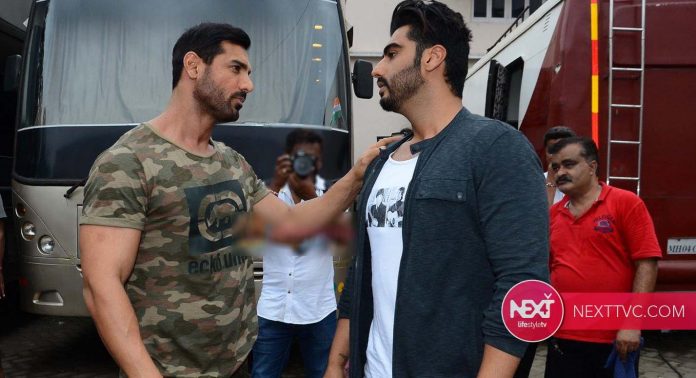 The cat is finally out of the bag. After scouting for a Gen-Y hero to step in for Ek Villain 2, director Mohit Suri has finally ended his search in Arjun Kapoor. Yes, it will be Arjun versus John Abraham in the big actioner that is expected to be mounted on a lavish scale and will be bankrolled by Ekta Kapoor and Bhushan Kumar.

Now, John Abraham will have a huge face-off with Arjun Kapoor, albeit on screen. The two heroes have now teamed up for Mohit Suri’s Ek Villain 2.

A source tells us, “Mohit’s Ek Villain 2 has four lead characters who are integral to the film’s narrative and take the story ahead. When Mohit Suri announced the sequel to his next film Ek Villain, it turned out to be a huge ensemble. John Abraham, Disha Patani and Tara Sutaria were already locked for the film. Reportedly, Aditya Roy Kapur was going to be the other male lead, but owing to creative differences over the script, it didn’t work out. So Mohit was looking for someone and roped in Arjun for the same. Unlike the first part, in this instalment, both John and Arjun play villains.

” This will be Mohit, Ekta and Arjun’s second project after Half Girlfriend.

Arjun has been rigorously training because this will be one of the first few films he kickstarts once the situation allows them to shoot. The source adds, “There are several confrontation adrenaline pumping action setpieces designed for both John and Arjun and it includes a mammoth fight sequence as well. Arjun is paired opposite Tara in the film, but the plot is such that there might also be an Arjun-Disha love angle as well.

” The film is expected to go on floors by the end of this year, after John wraps up work on Satyameva Jayate 2 and Arjun also finishes Kashvie Nair’s untitled project. In fact, John and Arjun are also part of the Nikkhil Advani production venture (Kashvie’s film), so Ek Villain 2 will be their second film together.