Amitabh Bachchan lent his voice to the film “The Lipstick Boy”

Voiceover of Amitab Bachchan in the movie The Lipstick Boy. 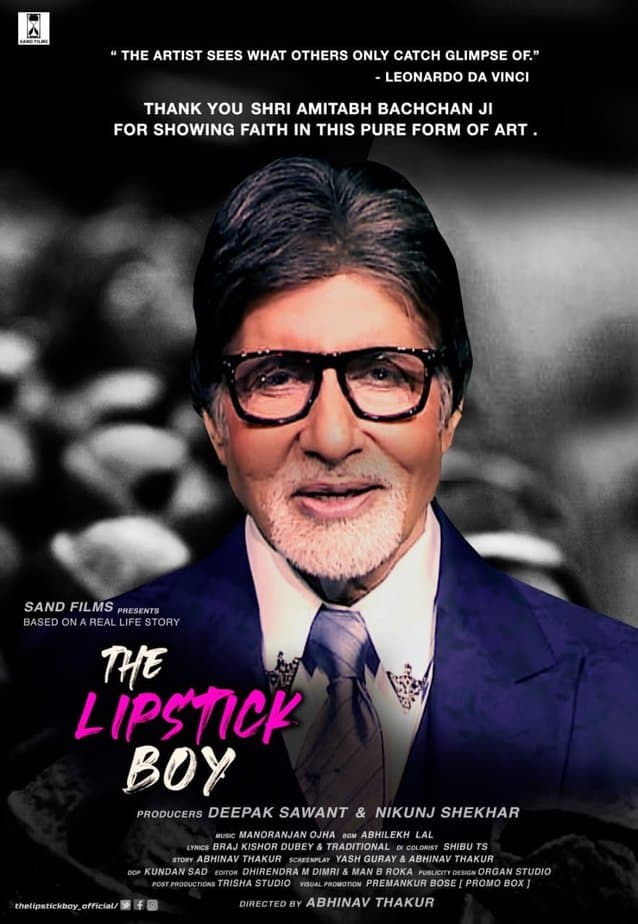 In the Indian film industry these days only good content and direction dominate. It is evident from the recently released films that the audience is promoting only good and strong stories on the film screen. It is believed that it takes a lot of time and hard work for newcomers to emerge in Bollywood.

These days, there is a discussion in Bollywood about “The Lipstick Boy”, which is a film based on a true incident, the film is in the discussion because it has been supported by the megastar Amitabh Bachchan. It is being told that Bachchan has lent his voice to the story of this film. The film is directed by Abhinav Thakur whose previous film Yeh Suhagrat Impossible was well received by the audience with an IMDb rating of 9.2. Abhinav Thakur also directed several short films which have been awarded by many International Film Festivals.

Talking about the movie Director Abhinav Thakur has told that the main objective of this film is to take the famous Launda Naach which is disappearing from Bihar to the country and the world, to show that the life of the artists associated with this culture is full of struggles. There was a time when this dance was prevalent in the costume of women by Shri Bhikhari Thakur Ji, who has been called Shakespeare of Bhojpuri, and the play written by him, Bidesia dominated the corridors of Bollywood, but with the changing times, both the interest and tradition of the people have changed. Even today, there are many such artists in Bihar who are keeping this form of dance alive, the story of this film is inspired by the life of Bihar’s famous Launda dancer Kumar Uday Singh and artists like him. Today, when any artist dances in the environment of a woman, people taunt him, look at him with an inferiority complex, and call her a launda, but still that artist does not leave his art and keeps his culture alive. Director Abhinav Thakur is bringing the biography and struggle of the actors through this film on the big screen through “The Lipstick Boy”. The Hindi film “The Lipstick Boy”, produced under the banner of Sand Films Production, is based on the famous folk dance (Launda Naach) of Bihar. Bollywood MegaStar Amitabh Bachchan has given his special voice in the film and in the film is also appreciated by  Hon’Shri Tarkishore Prasad, Deputy Chief Minister of Bihar, His Excellency Bihar  Governor Shri Phagu Chauhan, while appreciating the film they congratulated the filmmaker Abhinav Thakur and encouraged the youth to introduce the vanishing culture of Bihar. The film has been created for a worldwide audience for creative freedom. The film will soon be among the audience and it’s produced by Deepak Sawant and Nikunj Shekhar.

Deepak Sawant who is considered to be the lucky mascot of Amitabh Bachchan has always encouraged Bihar content  & also Nikunj Shekhar thanked the entire team for their utmost dedication.

Talking about the main character in the movie Manoj Patel, a famous film and TV actor from Bihar, is in the lead role and all the other characters of this film are from the roots of the story. The movie has been filmed in Bihar’s Nalanda and Patna in the year 2020, but due to the Pandemic lockdown the film Couldn’t get a chance to release but now the film will soon be among the audience.

Share
Facebook
Twitter
WhatsApp
Previous article
Sikhs of America formed what was called a “Sikh Float” and marched in the National Independence Parade in Washington, DC, on July 4.
Next article
Meeting in Washington, D.C. for the Fourth Bipartisan Annual Convention of PAKPAC
- Advertisement -