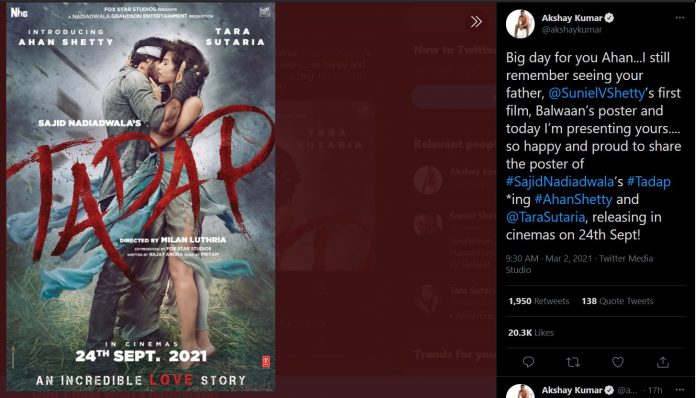 Actor Akshay Kumar on Tuesday shared the first poster of the debut film of fellow actor Suniel Shetty’s son, Ahan. In doing so, he took a trip down the memory lane, recalling Suniel’s first film.

Sharing it, he wrote: “Big day for you Ahan…I still remember seeing your father, @SunielVShetty’s first film, Balwaan’s poster and today I’m presenting yours…. so happy and proud to share the poster of #SajidNadiadwala‘s #Tadap *ing #AhanShetty and @TaraSutaria, releasing in cinemas on 24th Sept!”

Big day for you Ahan…I still remember seeing your father, @SunielVShetty’s first film, Balwaan’s poster and today I’m presenting yours…. so happy and proud to share the poster of #SajidNadiadwala‘s #Tadap *ing #AhanShetty and @TaraSutaria, releasing in cinemas on 24th Sept! pic.twitter.com/UQZWV7i4Pm

Called Tadap, the poster shows Ahan Shetty holding Tara Sutaria’s face and planting a kiss. His face is hidden while she has her eyes closed as they are caught in a whirlwind of emotions.

The film will be produced by Sajid Nadiadwala. The buzz around Ahan’s debut in acting has been around for a long time. Back in 2017, Suniel has said how he thought his son was in safe hands. He had been quoted as saying: “Ahan is going to get launched in December and is in very safe hands. He is learning acting in London currently and his film is being produced by Bollywood’s number one producer Sajid Nadiadwala which is even backed by Fox entertainment. So I think Ahan is in safe hands and other things depend on his talent, personality and luck.”

Later, Ahan shared another poster, a solo one, and wrote: “He is Fierce, He is Rebellious, and he’s a Lover!” Beyond grateful for this #sajidnadiadwala sir Thank you @milan.a.luthria for helping me bring this character to life #Tadap releases on 24th September 2021.”

In 2015’s his daughter Athiya had made her film debut with Hero with Sooraj Pancholi. The had been produced by Salman Khan. Suniel himself has seen a comeback of sorts, working in prominent roles in Tamil (Darbar) and Hindi films (Mumbai Saga), Telugu and Kannada films. Not that he had taken a complete break from films, doing bit roles.

Akshay, meanwhile, remains as busy as it can get. He has been churning out hits for a while now. However, since March last year, everything came to a grinding halt and so did he. No sooner did government begin easing rules, Akshay was back in action. Late last year, he flew to Scotland and completed the shoot of his film, Bell Bottom. After a brief break, he reported back to work, and was spotted shooting for Aanand L Rai’s Atrangi Re with Sara Ali Khan and Dhanush. Since, early January, he has been shooting for Bachchan Pandey with Kriti Sanon, Arshad Warsi and Jacqueline Fernandez in Jaisalmer.