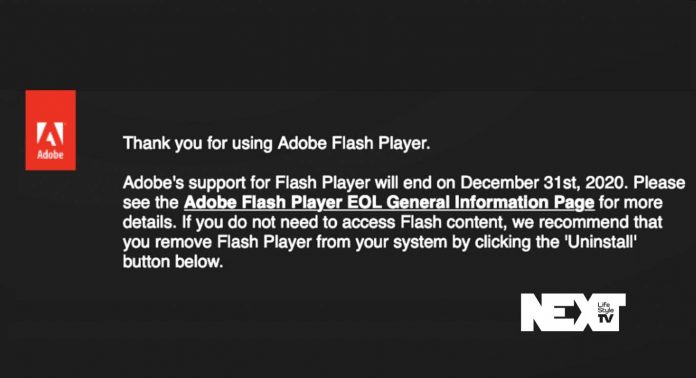 Flash Player, Adobe’s highly popular browser plug-in that enabled rich animations and an endless amount of online games, is officially being killed off. This is because the software was plagued with security issues over the years and failed to adapt to the Smartphone era.

Flash Player will stop running animations or online games after January 12 and will not be offering any security updates either. The company is also urging people to uninstall the plugin from their browsers.

Launched in 1996, Flash Player came at a time when everyone around the globe had very slow internet connections compared to today’s standards. The plugin would allow web designers and animators to create animations for videos and online games that could be downloaded relatively quickly.

You could make a full three-minute animation with multiple characters, backgrounds, sounds and music less than 2 megabytes (MB) and viewable from within the browser.

Hence, Flash Player became massively popular over the years as it offered everyone a quick and easy way to play their favorite games and watch viral videos even with unreliable internet speeds.

However, as mentioned earlier, the plugin was plagued with security issues over time and it failed to create a reliable smartphone alternative, which was growing to be an enormous market as we know it today. The smartphone industry moved on as big brands including Facebook, Google, and Netflix were already reliably streaming high-quality videos without Flash Player.

In 2015, Apple disabled the plugin from its Safari browser and Google Chrome also started blocking parts of it due to security reasons.

Hence finally in 2017, Adobe announced that it would retire Flash Player in 2020.