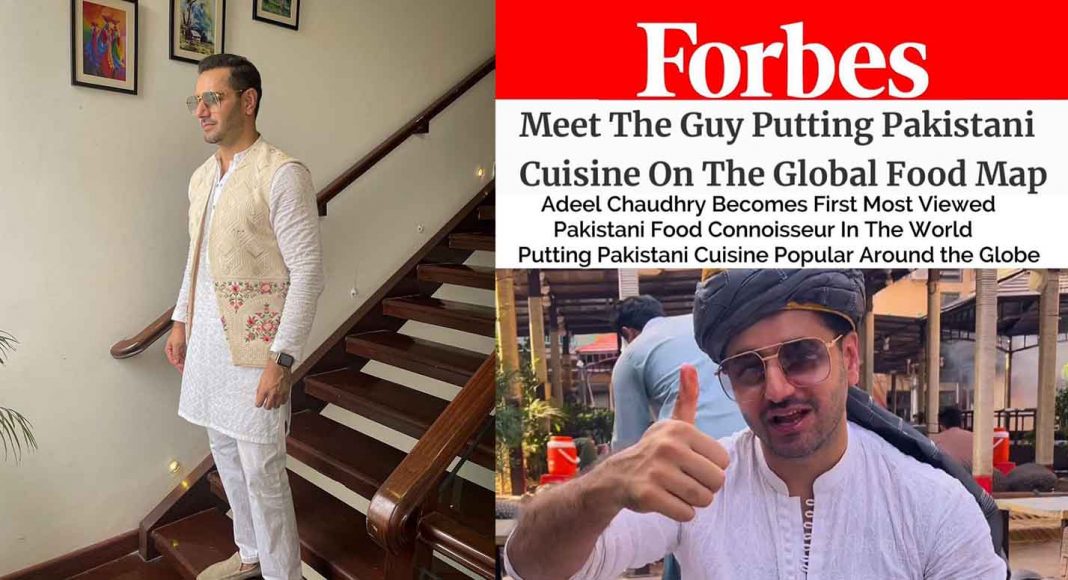 Adeel Chaudhry makes history as the first Pakistani oenophile to be featured in Forbes.

Two of the Lahore restaurants are owned by a social media celebrity.

Adeel Chaudhry, a social media influencer who has achieved worldwide success in the fields of music, television, film, and fashion, has been profiled in the prestigious international edition of Forbes Magazine. The owner of the Janoon and Bohat Aala restaurants in Lahore has become the most popular Pakistani food vlogger of 2022, with millions of views thanks to his efforts to promote Pakistani food around the world.

On Wednesday, he posted to Instagram to brag about being recognized by Forbes. For this honor and for finishing the year as the proudest Pakistani, I am deeply humbled and grateful to Allah and my followers. He thanked the magazine for recognizing Pakistani cuisine as

“one of the best in the world,” calling himself the “first Pakistani Food Connoisseur ever to be featured in the world’s leading magazine.”

With this success, Chaudhry wrote, he was closer to his goal of bringing international attention to Pakistani cuisine and culture. He penned, “We are united by food despite being separated by a border.” He then thanked his fellow chefs, content creators, foodies, and fans for all their hard work and dedication. He finally said, “You all are #BohatAala.”

The gourmet shared his background, his passion for food (especially fusion), and the story of how he came to open two restaurants. In an interview with Forbes, he said, “I love playing with spices and bringing a little enhancement to what is standard in the preparation of a local dish.” He also said that he and his head chef often try out new ways to give traditional desserts a global twist in the restaurant’s pastry lab.

But since locals’ palates are so accustomed to the food they eat on a regular basis, Chaudhry admitted that it was never easy for him to convince them to try fusion food. Some people may enjoy fusion cuisine, while others may not. When it comes to new food ideas, I think Pakistanis are still a little hesitant. He said the Punjab province in particular is very sensitive to any attempts to change the recipe.

Despite the pushback against culinary experimentation, Chaudhry thinks Pakistani restaurateurs should be more receptive to international trends. He revealed that his time spent working in real estate in Dubai inspired him to pursue his dream of opening his own restaurant, saying, “We have to be both relatable and stand out.”

In Dubai, I found that the food was presented in a way that was both visually appealing and delicious. It doesn’t matter if they’re just serving a drink or creating an elaborate meal; they’ll treat it like an event. A server might dance with it before setting it down on the table. I learned the hard way that adding some fun to the mix boosts the perceived value of the product or service the customer is about to buy. He exclaimed, “Theatrics are important and fun too; food needs to look delicious.”

as in, “Check out Salt Bae.” You’ll need to get creative if you want to outsell the competition in the food industry. And in Pakistan, I’m working hard to expand it. People need to feel an emotional connection to the food on their plates before they’ll feel motivated to eat it. Before ending, Chaudhry mentioned that he intends to open a second location of Junoon in the Old City of Lahore within the next month.