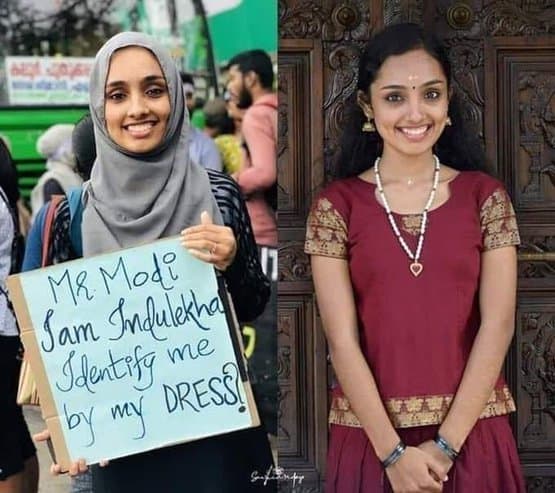 An 18-year-old girl name Indulekha Parthan gave a befitting reply to Prime Minister, Mr. Narendra Modi by wearing ‘burkha’ and holding placard that reads, “Mr. Modi, I am Indulekha. Identify me by my dress?”.

I love my Hindu brothers and sisters across the border. I've nothing to do with their faith, I love them for the human which reside in them. I'm super proud of Hindu youth standing up for the right! #CAA_NRC
THIS QUEEN THO! pic.twitter.com/fLWC6DfQua

Modi’s remark It may be recalled that while addressing a rally in Jharkhand, Mr. Modi said that those indulging in arson can be identified by their clothes. Four days later, reacting to the remark, Indulekha took part in a march to the Reserve Bank of India building to protest against the Citizenship Amendment Act 2019. She was one of the thousands of students who had assembled in front of Kochi’s Rajendra Maidan.

In the march, she was seen wearing purple colored hijab. After her photo went viral on social media, she said that she wanted the PM to know her views.

The girl further said that she faced trolls after her photo went viral on social media. My parents were also tensed, she added.