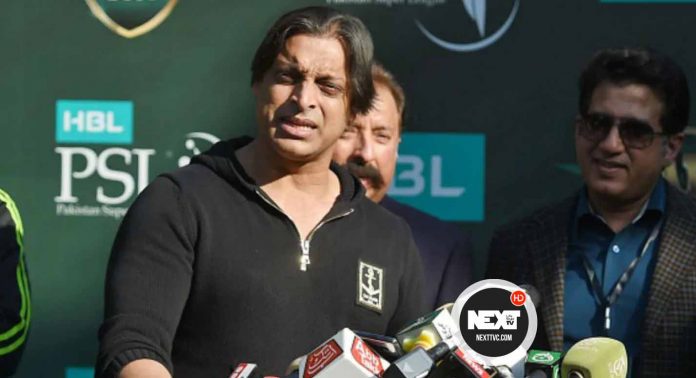 Pakistan legend Shoaib Akhtar has created controversy after an old interaction of his has now gone viral for all the wrong reasons.

Social media users have taken strong exception to the comments made by the cricketer who was known for his deadly pace bowling.

The pace bowler also known as Rawalpindi Express has invoked the ‘Ghazwa-e-Hind’ proclamation and said Muslims will take Kashmir and invade India from all sides. Ghazwa-e-Hind means a “Holy War against India”.

In an interview with Samaa TV, Shoaib Akhtar went on to say that in the scriptures, the Ghazwa-e-Hind will take place in the River Attock and it will be coloured twice in blood.  According to the Ghazwa-e-Hind, there will be forces coming from Syria with black flags who will march towards India and they will conquer the country to convert it into an Islamic state.

“It is written in our scriptures that Ghazwa e Hind will take place. The river in Attock will be coloured red twice with blood. Forces from Afghanistan will reach till Attock. After that forces will rise from Shamal Mashriq, different contingents will arrive from Uzbekistan, etc. This refers to Khorasan, a historical region which extended till Lahore.” Akhtat can be heard as saying in the video.

Akhtar is known for his outspoken nature, recently when Mohammad Amir announced his retirement from international cricket,  Akhtar said that he would take Mohammad Amir under his guidance and then Pakistan would see how he would prosper.

Shoaib Akhtar has also criticised head coach Misbah-ul-Haq for the way how he has handled the Pakistan cricket team. After Pakistan lost a Test series against England for the first time in 10 years, Shoaib Akhtar asked Mishah ul Haq to take more responsibility.

…now, more than ever to give a voice to the voiceless. The press in Kashmir has operated under tremendous pressures of reporting from a conflict zone but since August 2019 we find ourselves in unchartered territory. The Kashmir Walla is among the oldest independent media outlets in Kashmir and has withstood successive lockdowns as well as attempts to suppress us, fighting back with authoritative ground reports based on facts.

We need your solidarity to keep our journalism going. Your contribution will empower us to keep you informed on stories that matter from Kashmir. Show your solidarity by joining our community. Kashmir thanks you.