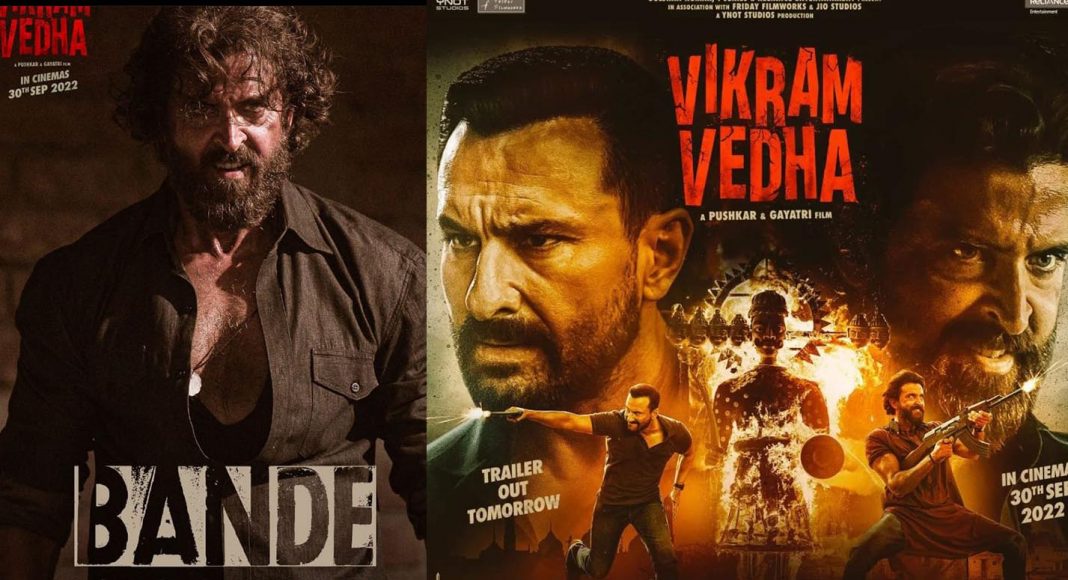 Do you have weekend plans to watch Vikram Vedha? Here's our review of this Hrithik Roshan and Saif Ali Khan film.

It’s never easy to make a successful remake; sometimes the filmmakers hit a home run, and other times the movie bombs. This week’s release, Vikram Vedha, falls in the former category, as director duo, Pushkar and Gayatri, adapt their Tamil original to perfection for the Hindi-speaking audience and enhance the impact by making optimum use of Hrithik Roshan’s superstardom and Saif Ali Khan’s screen presence.

First things first, Vikram Vedha is among the most complex screenplays of modern times, which has been simplified in projection to make the film reach out to a wider section of the audience. The narrative of this action thriller speaks volumes about Pushkar & Gayatri’s command over their craft. The film rides on smart writing, loaded with twists and turns which keep you on the edge of your seat, and has enough action sequences infused at the right moments resulting in high points at regular intervals.

#VikramVedha out in cinemas TOMORROW.

The high points of Vikram Vedha include Saif Ali Khan’s introduction, which reaches at its peak with Vedha aka. Hrithik Roshan’s arrival, the plot twist at the end of the first tale, and the intermission block. There’s also a quirky action sequence featuring Hrithik in the first half that lands very well. Even in the second half, the story’s momentum is building, especially in the final 45 minutes. Of course, Vikram Vedha is not devoid of drawbacks. The romantic track of Saif Ali Khan and his wife, Radhika Apte, doesn’t land as well as expected and just adds on to the run-time.

The pace dips a little due to the sub-track featuring Rohit Saraf in the second half, and the episode could have been crisper on the edit table. The music is weak and warranted at least one chartbuster. However, the background score by Sam CS acts like another hero in all scenes. It’s designed to justify the larger-than-life aura of Hrithik Roshan, with grandeur in all beats made for Vedha. The placement of Bande in the second half is sure to be greeted with whistles. A dialogue-heavy film like Vikram Vedha is loaded with one-liners by Manoj Muntashir and B.A. Fida, which are sure to result in multiple clap-trap moments for the audience.

Like many other A-listers, Hrithik Roshan is one of those actors who is best seen in a theatre. He gets into the skin of Vedha and brings in an element of madness to it. He hits people with such conviction and assurance that we know he can actually do it. He makes all the action scenes look believable. HR manages to hide the storm beneath the calm when needed and explodes like a bomb in the intense moments – it’s a rare combo, which he strikes to perfection. Saif Ali Khan delivers another reliable performance as Vikram, emerging as the perfect nemesis to Hrithik. He gets his moments in those walks and displays bravado at the right moments. Keep an eye out for the subtle shifts in his tone and mannerisms as his character develops throughout the story. Radhika Apte as Priya and Rohit Saraf as Krishna do well in their respective roles, but the real surprise package in Vikram Vedha is Sharib Hashmi. He is simply phenomenal as Babloo and stands tall in front of both Hrithik and Saif. Good performances can be found from the rest of the cast as well.

For the most part, Vikram Vedha is an action thriller that benefits from Hrithik Roshan and Saif Ali Khan’s presence and is best enjoyed in a theatre. It’s loaded with action, dialogue-baazi, and the right amount of massy elements, but it warranted a little better music. The lack of a romantic track for either of the two leads (as demanded by the script) makes the reach a little concentrated, but nonetheless, it has enough to emerge as a winner for the audience in terms of a package for big-screen entertainment.