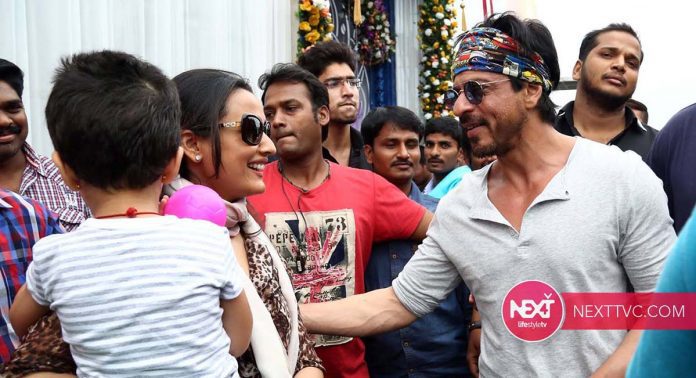 For our throwback special, we bring amazing pictures of Mahesh Babu, Shah Rukh Khan and Namrata when shared hearty conversation back in 2015 at Ramoji Film city in Hyderabad.

Meanwhile, on the work front, Mahesh Babu will be seen in Geetha Govindam director Parasuram’s next. Parasuram recently revealed that he had written this film while shooting for a film with Vijay Deverakonda and that is is a promising script.

@urstrulyMahesh it was my pleasure actually. And ur crew was so warm and welcoming. Will drop in again and have some Hyderabadi food with u.

South Indian and Bollywood celebs often don’t share screen space, but off-screen they share a special bond. Stars from the South Indian and Bollywood film industry are often seen bonding at events, parties and awards shows. One such surprising event took place back in 2015 when Shah Rukh Khan paid a surprise visit to Mahesh Babu on the sets of Telugu film “Brahmotsavam” in Hyderabad. Also, present on the sets was former actress and Mahesh Babu’s wife Namrata Shirodkar. For our throwback special, we bring amazing pictures of Mahesh Babu, Shah Rukh Khan and Namrata when shared hearty conversation.

Both, Mahesh Babu and SRK were shooting at the Ramoji Film City for their respective films. While the Telugu superstar was shooting for Brahmotsavam, SRK was shooting for his film Dilwale. Mahesh was totally humbled by King Khan’s surprise visit on the sets. The Sarileru Neekevvaru also took social media and shared a few photos from their meet. “It was a pleasure meeting @iamsrk on our ‘Brahmotsavam’ sets today. The entire cast and crew were thrilled. Thanks Sir. Humbled,” Mahesh had posted on Twitter.

On the same day, SRK also made a surprise visit to Ramoji Film City where Ram Charan was shooting for his film, Bruce Lee The Fighter.