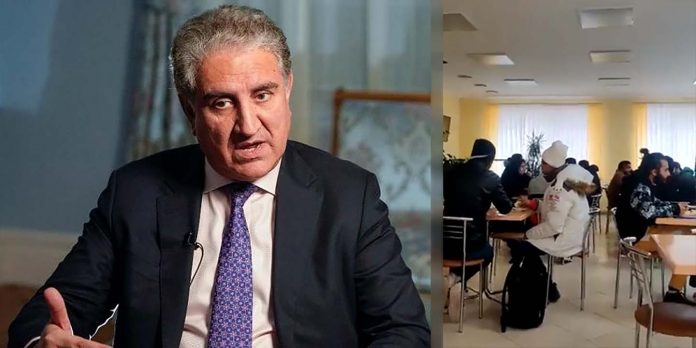 There are children in suffering because of the conflict, and we tried to support them on humanitarian grounds,” said the Foreign Minister.

Indian students who were fleeing the Ukraine conflict on humanitarian reasons were helped by the Pakistani embassy in Ukraine.

In a video that has gone popular on social media, an Indian student can be heard alleging that Pakistani authorities in Lviv looked after them.

#Pakistani Embassy helping Indian students in Ukraine.
There is no one from the Indian embassy to help the #Indian students.
.
.#IndiansInUkraine #UkraineRussiaWar #Ukraine #humanity pic.twitter.com/6sqKfNDDd2

They’re all Pakistani students as you can see. Pakistanis make up the majority of our group, with just four Indians among us. Student said that when they arrived at the embassy in Kharkiv from Lviv, there were no Indian officials to greet them.

The Pakistani embassy can be seen in the video where students can be seen having their meals in a cozy atmosphere. PTI’s Sindh Huqooq March leader Shah Mahmood Qureshi also alleged that Pakistan supported Indian students escape the Ukraine conflict in Lviv.

After reaching Ternopil, which is located in the west of Ukraine, he said that around 50 nationalities were on their way to be evacuated. It was announced on Sunday that the Pakistani embassy in Ukraine was preparing to evacuate Pakistanis as quickly as possible.

There is optimism that the evacuation procedure would be finished within two or three days, he said Radio Pakistan.

A curfew was generating problems and many people were gathering near the border, according to the embassy.