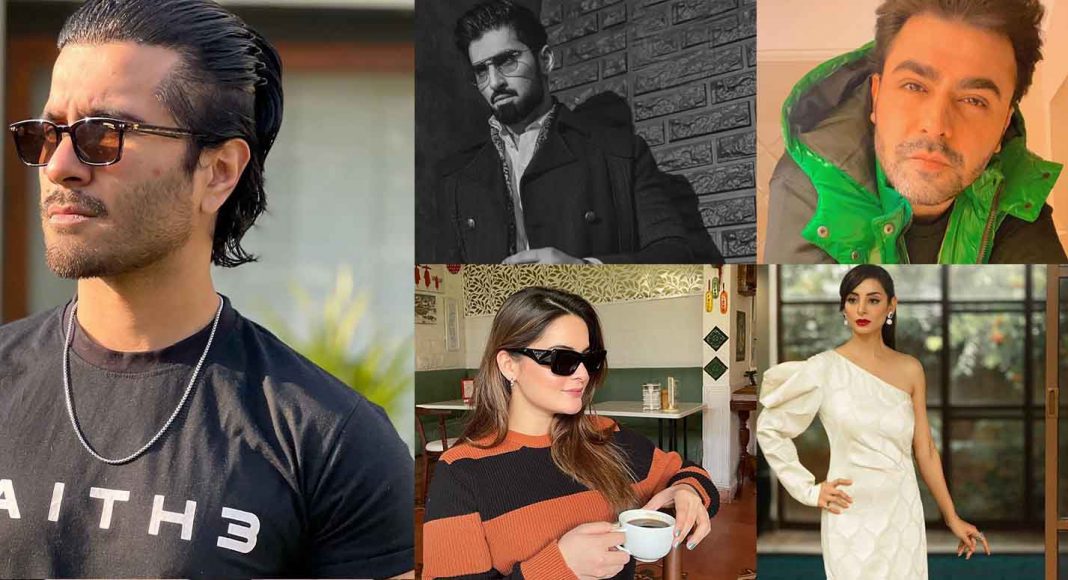 Several people, including Farhan, Aiman, and Minal, plan to sue Feroze Khan for invasion of privacy.

After Feroze made their personal information public, Osman Khalid Butt, Sharmeen Obaid Chinoy, and Mira Sethi all spoke out.

On Wednesday, Sarwat Gillani posted on Twitter about the dangers of sharing personal information online. The actor was upset that Feroze Khan had written about her and other artists he had threatened to sue with legal action.

The day before, Feroze had sent defamation notices to several artists for making unfounded allegations about the actor.

Initially, Feroze tweeted the legal document, complete with addresses and personal contact numbers, to his official Twitter account. “My legal team has served a defamation legal notice to those for [sharing] false and baseless allegations,” he later wrote on social media before deleting the post. By the time he took the tweet down from his official account, which boasted a whopping 442,000 followers, it had already gone viral.

The Joyland actor took to Instagram to document his incessant barrage of spam calls from unidentified callers. “It is bizarre and despicable that Feroze Khan would release private information, such as the phone numbers of various famous individuals, under the absurd pretext of serving them with a legal notice.” “Not only do these kinds of actions break the law, but they also show a complete inability to deal with conflict in a civilized manner,” explained the star of the Churails.

Sarwat then added a witty remark as a conclusion to her post. What did she say? “Whereas Feroze only had to deal with his ex-wife and her lawyer two days ago, he now has to deal with ten famous people and their attorneys.” Have fun!”

Similarly, Mira Sethi, another Hollywood star, agreed with Sarwat and posted on her Instagram Story, “Sharing the same sentiments as Sarwat regarding the leaking of information, I will also focus on numbers.” Unbelievable. I intend to maintain my support for Aliza Sultan and have instructed my attorney to respond to the notice.

Sharmeen Obaid Chinoy, an Oscar winner, also showed her support for Sarwat by commenting on her post with the phrase “Wait till you see mine.” The Academy Award-winning director said in a separate Instagram Story, “To set the record straight, it’s against the law to disclose someone else’s private information, like their phone number or address.” After 20 years of working with male abusers of their partners, the author has seen a lot. “I’m aware of every single one of their strategies.”
The actors also discussed the emotional toll of the ordeal, writing, “The hundreds of calls and messages I’ve been receiving as a result of his actions have caused me extreme emotional distress.” Mentally harassed, tortured, and threatened by numerous individuals, my safety has been compromised. “Threats have been made against my life and the lives of my loved ones.”

According to the statement’s final line, “Such actions are illegal. This being said, I will be taking very strict legal action against Feroze Khan for leaking my private information on social media along with multiple other famous individuals.”

However, Farhan Saeed has already served a legal notice on his co-star, Tich Button. Farhan has informed the court that he has not yet received Feroze’s defamation notice in person, as evidenced by the notice obtained from his publicist. The “defamation notice” was only shared on “WhatsApp, social media, digital platforms, and virtual public spaces,” which is where he has only encountered it.

In addition, Farhan’s legal notice to Feroze mentions a privacy breach caused by Feroze’s social media sharing of the defamation notice, which exposed the actor’s private information to the general public. To set the record straight, the defamation notice does not include Farhan’s personal address; rather, it includes the business where he is employed. According to the notice, “this has been done deliberately to malign our client in his professional space.” “Our client is considering filing a formal complaint against you for your conduct.” “Although it may be impolite to bring the fact that other people, including women, have experienced the same annoyance to your attention, it is impossible to deny that this is the case.”

The notice goes on to emphasize that Farhan has never defamed Feroze or responded to his allegations of abuse in any way, shape, or form. “We’d like to make it clear that our client is not involved in your client’s private matters.” “When it comes to business, our client does not have time to deal with your client’s personal issues.”

In addition, Farhan’s legal team made certain that a separate case was filed against Feroze for breach of contract in relation to Farhan’s production company. According to the notification, “our client [Farhan] previously enjoyed a good rapport with your client [Feroze] and helped build the public profile of your client as well.” But your client’s behavior has destroyed any chance of saving the relationship.

The legal team representing Farhan has requested that the attorneys representing the Khaani actor withdraw the defamation notice filed against Farhan and issue a public written apology to the actor and the public within three days. If Feroze doesn’t comply, Farhan’s lawyers will file civil and criminal charges against him.