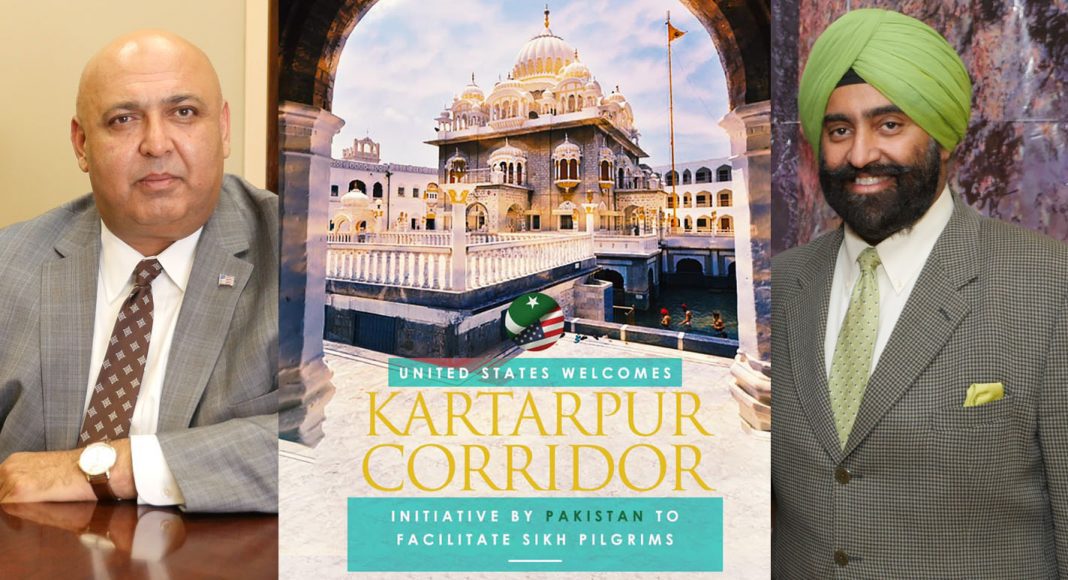 The Kartarpur corridor connects Darbar Sahib in Pakistan’s Kartarpur with the Dera Baba Nanak shrine in Gurdaspur It facilitates visa-free movement of Indian pilgrims, who will have to just obtain a permit to cross over to Pakistan

Jasdip Singh Jesse – Chairman Sikhs of America and Sajid Tarar – Chairman Muslims of America Congratulate All the Sikhs Community and Thanks to Pakistan’s Govt. PM Imran Khan and the people of Pakistan for Opening Kartarpur Corridor.

India and Pakistan on Thursday signed a pact to open a land corridor between the two countries that will allow Indian pilgrims to visit Darbar Sahib Gurdwara in Kartarpur, in Narowal district of Pakistan, a move that is expected to boost people-to-people contact at a time of tense relations between the neighbors.

The signing of the pact caps months of negotiations between the two uneasy neighbours and was concluded despite spikes in tensions on two occasions, including the air raid by India on a terrorist training camp in Pakistan’s Balakot region in retaliation to the attack on a Central Reserve Police Force convoy in Pulwama that killed 40 security personnel.

Analysts say that the opening of the corridor could be leveraged to initiate talks between India and Pakistan.

The Kartarpur corridor connects the Darbar Sahib Gurdwara with the Dera Baba Nanak shrine in Gurdaspur district in India’s Punjab province, facilitating the visa-free movement of Indian pilgrims who just need a permit to cross over to Pakistan.

The pact was signed by S.C.L. Das, joint secretary, internal security, in the Indian home ministry, and Mohammad Faisal, director general, South Asia, in the Pakistan foreign office. The pact was signed at the “zero lines” on the border, indicating that both sides wanted to keep the signing low key.

The pact permits Indians and people of Indian origin to use the corridor to visit the shrine. The people need to carry their passports and an electronic travel authorization they receive if their registration for the pilgrimage is deemed successful. People of Indian origin holding the passport of another country will need to carry their Overseas Citizen of India card.

Pilgrims can travel as individuals or in groups. They can also travel on foot.

India will send the list of pilgrims to Pakistan 10 days ahead of their travel dates. Confirmation will be sent to pilgrims four days before their departure dates. Pakistan has said it will make sufficient provision for community kitchens in the gurdwara and distribution of prasad.

India hopes Pakistan would drop its insistence on levying a $20 service charge per pilgrim per visit, according to Das. “This (charge) is not in consonance with the religious and spiritual sentiments of Indian pilgrims. India has shared its deep disappointment with Pakistan for its refusal to waive the fee,” Das said. “However, in the interest of the pilgrims and timely operationalization of the Kartarpur Sahib Corridor before the 550th Prakash Purb (birth anniversary of the founder of Sikhism, Guru Nanak), India has agreed to sign the agreement,” he said.