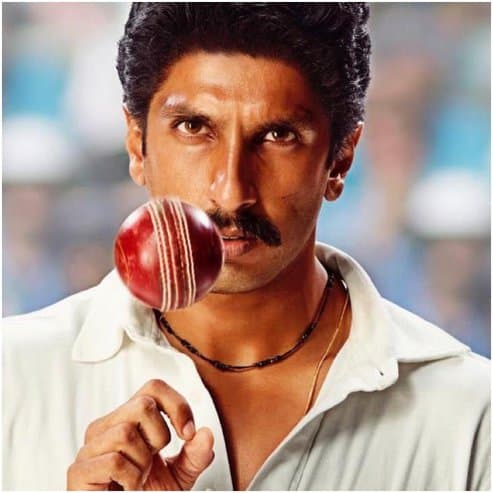 As Ranveer Singh kicked off his 34th birthday, he took to social media to share his first look as Kapil Dev from Kabir Khan’s upcoming film, ‘83. The star of the film can be seen dressed as the legendary former Indian cricketer who is lovingly known as ‘Haryana Hurricane.’ Ranveer’s fans were eagerly waiting for his look to be out. Finally, the wait is over and Ranveer shared a glimpse of himself stepping into the shoes of the Indian cricketer who led Team India to World Cup victory in 1983.

The star is currently in the UK for the shooting of the film with Deepika Padukone. The film will star Ranveer as Kapil Dev, while Deepika will be seen stepping into the shoes of his on screen wife, Romi Dev. A while back, Ranveer had shared a video in which he was seen practising with the team of ’83 to fit into the shoes of Kapil Dev. Even before heading for the UK schedule, Ranveer had stayed with Kapil Dev at his house in New Delhi for 10 days. He spent time with the former cricketer to improve his skill as well as to know how he is in personal life.

The film will showcase the journey of Kapil Dev, a boy from Haryana who leads team India to victory at the Lord’s stadium in London the 1983 World Cup after defeating West Indies. A former cricketer, Balvinder Singh Sandhu also has been training Ranveer and other team members for the film. A workshop was organised in Dharamshala where all the actors together spent time with various cricketers like Kapil Dev, Mohinder Amarnath and more. The film is being produced by Kabir Khan and Deepika Padukone. It is slated to release on April 10, 2020.