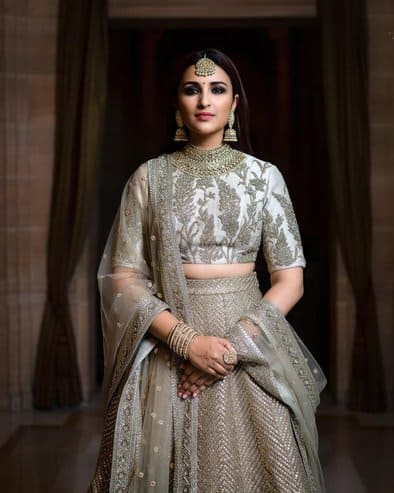 Priyanka Chopra and Nick Jonas’ wedding was a grand affair. Today, Parineeti Chopra took to Instagram to share a photo of herself from the wedding and we have to say, she looked absolutely stunning. Take a look.

Priyanka Chopra and Nick Jonas’ wedding was a grand and lavish affair. Their wedding was more than just a nuptial. It was a blend of two different cultures and was managed in one of the smoothest ways. The two tied the knot in a lavish wedding at the Taj Umaid Bhawan Palace in Jodhpur. All close family and friends were present to make the occasion even more special. Among them, Priyanka’s sister and actor, Parineeti Chopra made sure to be the perfect bridesmaid.

Today, she took to Instagram to share a photo of herself from the wedding and we have to say, she completely blew our mind. In the photo, Parineeti can be seen dressed in a Sabyasachi lehenga along with stunning and bold necklaces, earrings and a maang tikka. She looked absolutely regal and graceful in the traditional attire. Her caption summed up Peecee’s wedding as she wrote, “Royal for the royal wedding @sabyasachiofficial #PCkiShaadi”.

Check out her stunning photos:

Isn’t she a beauty? A while back, Parineeti took social media by a storm when she shared an adorable photo from her sister, Priyanka’s wedding. They both posed at one of the wedding events and looked absolutely spectacular. Also, after the wedding, Parineeti wrote a heartfelt message for Priyanka and Nick along with sangeet’s photos, “For our SANGEET, the Chopra family decided to depict Mimi didi and Nick’s love story through songs, scenes and skit – full Bollywood style!!! The whole family rehearsed for days and days. And we’re ready to beat the Jonas side hollow!!! But when the ladka wallas came on stage, they stumped us. They had been rehearsing for a long time. They sang and danced LIVE, including lip syncing hindi songs!!!!!! Damn, we should have known. All of this – but the spirit of competition was overpowered with love, happiness, laughs, whistles, cheering and noise!!! Wow wow wow. WHAT A NIGHT. P.S. We shared the trophy.”