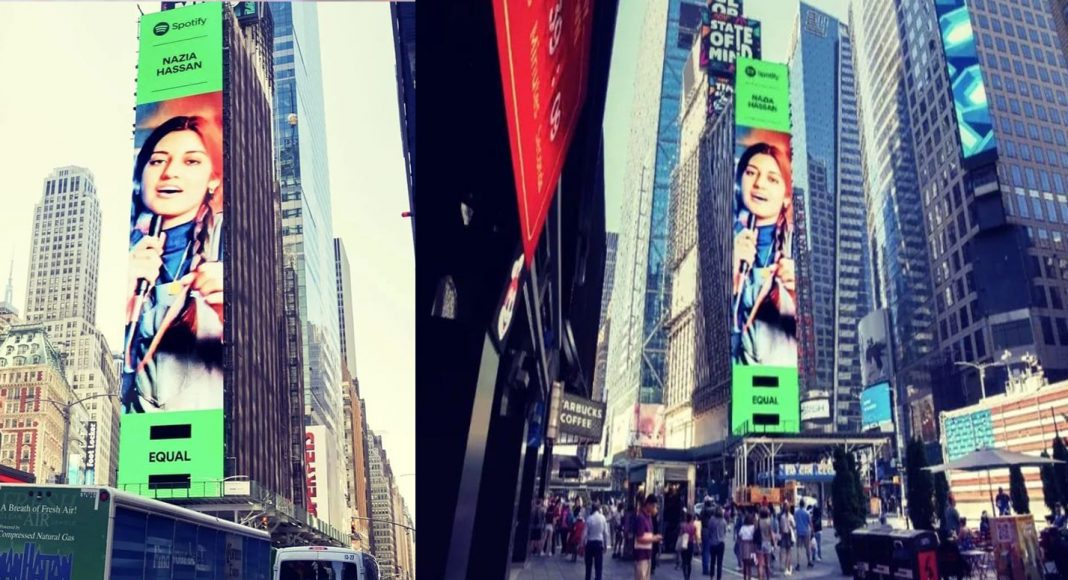 Times Square is aglow with the music of Nazia Hassan, the queen of pop.

The 22nd anniversary of the singer-songwriter's death is being commemorated.

In light of this momentous occasion, her brother, Zoheb Hassan, reflected on his sister’s legacy and accomplishments, adding, “My sister always saw herself as a social worker, and not really a musician,” according to a press release. She contributed to world peace and children by working with the United Nations. Zoheb As someone who felt compelled to help young people in need, she also did a lot of good things for other people, most of which went unnoticed.

Said the musician/producer, “She did not discuss this side of her life with anyone, including her own family. After her death, we finally learned the truth. What made her so exceptional was that she never bragged. Zoheb also used the event to thank Spotify for making her “loved sister” an ambassador for EQUAL Pakistan and Global and for “promoting the female musicians of the region.”

Nieces of Nazia’s, Allanya and Amelia Hassan, also offered their appreciation. We grew up listening to her songs, and she was such an inspiration to us. They said, “We are very thankful and thrilled to be a part of her history, and she and her music have been a great inspiration to us when it comes to creating and singing ourselves.”

In the 1980s, Nazia began her career as a singer and songwriter as half of the duo Nazia and Zoheb. She has since gone on to become a lawyer and social activist. There have been almost 65 million record sales between her and her siblings. In 1980, Nazia made her singing debut with the song “Aap Jaisa Koi” in the Indian film Qurbani. The first Pakistani to receive the Filmfare Award for Best Female Playback Singer, she did so at the tender age of 15. Until now, she was the youngest person to win the prize.

Her first album, 1981’s Disco Deewane, was the best-selling Asian pop album at the time, topping the charts in fourteen countries. With the help of the album’s English-language hit Dreamer Deewane, she became the first Pakistani singer to crack the British charts.

In just 15 years, Nazia rose to fame and became a national icon in Pakistan. In 1991, she was designated as UNICEF’s cultural ambassador in recognition of her charity work and the Pride of Performance Award she had previously received from Pakistan. She was only 35 when she passed away in London from lung cancer in 2000.

Web Desk - September 18, 2019
US President Donald Trump has said that he will meet Prime Minister Narendra Modi and Pakistan premier Imran Khan soon amid tensions between the...