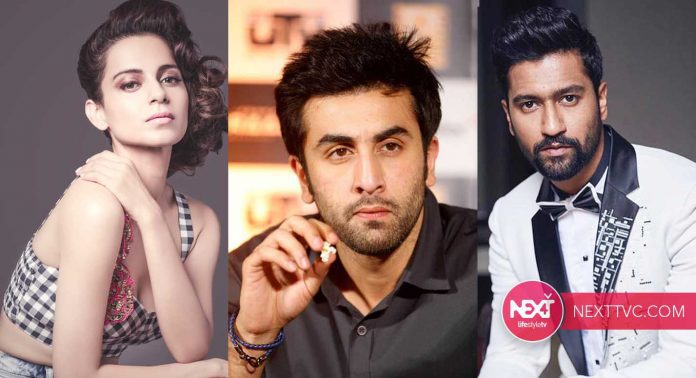 Kangana Ranaut took to social media to tweet about the alleged drug abuse in Bollywood. She further urged Bollywood stars like Ranbir Kapoor, Ranveer Singh, Vicky, Ayan Mukerji and others to give their blood samples and prove the drug theory wrong.

Over the past few days, the alleged drug angle in Sushant Singh Rajput’s case has irked netizens to question Bollywood link with it. Amid this, Kangana Ranaut recently appeared in an interview and alleged that many actors in Bollywood are involved in taking drugs. She alleged that ‘99 percent’ of Bollywood celebs were involved in drugs abuse and claimed that many names would come forth if the authorities investigate. Now, she has tweeted and urged Ranbir Kapoor, Ranveer Singh, Ayan Mukerji and Vicky to give their blood samples and bust rumours of drug use.

“I request Ranveer Singh, Ranbir Kapoor, Ayan Mukerji, Vicky Kaushik to give their blood samples for drug test, there are rumours that they are cocaine addicts, I want them to bust these rumours, these young men can inspire millions if they present clean samples @PMOIndia.”

She further tagged the Prime Minister Narendra Modi’s office account on Twitter. She had appeared in an interview recently and recalled how drugs are apparently rampantly used in parties in Bollywood. She even recalled an incident when she was drugged too.

Kangana had alleged in her interview with Republic TV and said, “At some point, 99 per cent of them. Some might have faced health conditions, or because of age, or after being admitted or having repercussions, they have quit now after doing it throughout their youth. Even if I count them, there are 99 per cent people. Everybody without fail, at some point, is doing it, and if there is a party, everyone is indulging in it.”\

Kangana opened up about the drugs angle in Bollywood after the Narcotics Control Bureau got involved in Sushant’s case after the Enforcement Directorate wrote to them about certain chats between Rhea Chakraborty, Showik Chakraborty, Samuel Miranda and others related to substances.

She spoke at length about how drugs are allegedly procured in Bollywood parties and called out celebs for doing so. Meanwhile, Kangana has also been fighting for justice for Sushant Singh Rajput. She had even called out an award show for snubbing Sushant’s films like Chhichhore and giving all awards to one film. Currently, Kangana is in her hometown in Manali. She will soon be seen in Thalaivi as J Jayalalithaa along with Arvind Swami.