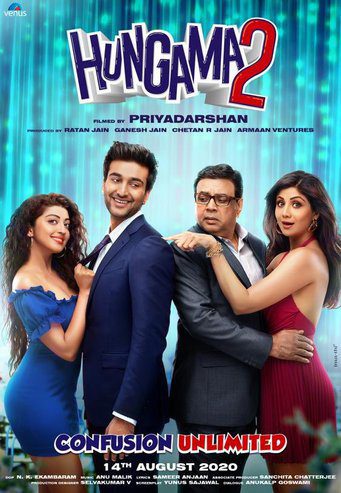 Marking her Bollywood comeback with Sabbir Khan’s Nikamma, there’s no stopping for Shilpa Shetty. After sharing the screen with Abhimanyu Dassani, the actress is all set to reunite with Paresh Rawal in the sequel of Hungama. The speculations around director Priyadarshan’s next have finally been put to rest as Shilpa Shetty, Paresh Rawal, Meezaan Jaaferi and Pranitha Subhash have been roped in for Hungama 2. The 2003 film was a laughter riot starring Akshaye Khanna, Rimi Sen and Aftab Shivdasani in the lead while Paresh Rawal was seen in a key role boosting the comic value of the film.

Recently, the veteran actor unveiled the first look poster of Hungama 2 on his Twitter handle. The makers are eyeing the Independence Week. Paresh Rawal announced the film’s release date as August 14, 2020. The first installment was all about confusion and rib-tickling humour, and the sequel promises the same. “Ready for Confusion Unlimited? Priyadarshan & Ratan Jain return with reboot of everyone’s favorite comedy entertainer #Hungama2 Produced by @rtnjn Hungama2 will release on 14 [email protected] @SirPareshRawal @TheShilpaShetty @MeezaanJ @pranitasubhash #Venus @hungama2film”, read his caption.

The first part also starred Rajpal Yadav, Shakti Kapoor, Upasana Singh, Sanjay Narvekar, Razzak Khan, Shoma Anand and others who gave a high dose of laughter to the audience and now we can’t wait to watch what the sequel unfolds.