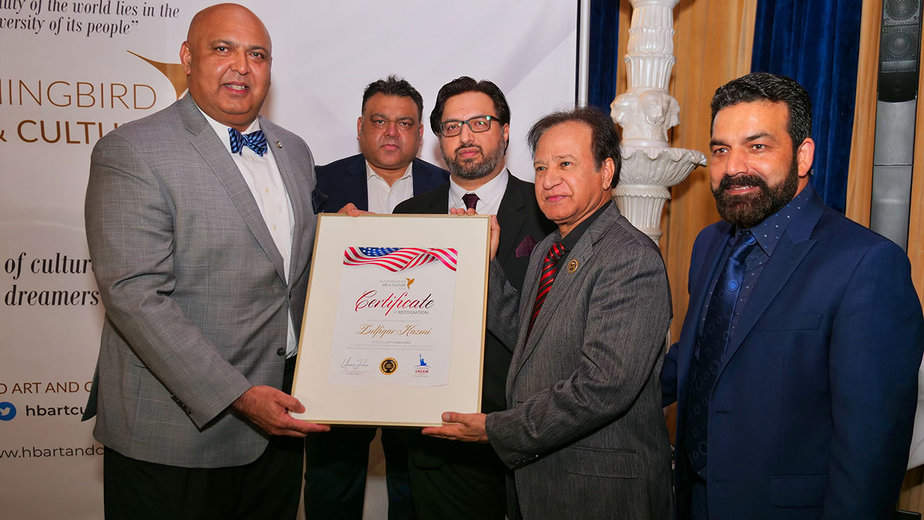 An epoch-making gathering of notable Pakistani American Community members took place in the Washington, D.C. Metro area in honor of Dr. Zulfiqar A. Kazmi is an internationally known Pakistani American scholar and social scientist. This momentous event and recognition dinner was hosted by HUMMINGBIRD ART & CULTURE FOUNDATION a quarterdeck committed to promoting art and culture in the United States. The Award of Excellence was presented to Dr. Kazmi in recognition of his remarkable services and scholarly efforts for Peace & Development, Inter-Religious cooperation, Human Welfare, and Media Accuracy.

Mr. Sajid Tarar is a Pakistani American businessman, a Republican Party activist who is known for being an advisor to former President of America Donald Trump and CEO of Center for Social Change, Maryland addressed the audience as Chief Guest. In his special remarks Mr. Tarar emphasis, how to bring change through community service and leadership. He said we have the best example and we may follow Dr. Kazmi and his work for human development. He mentioned his impartiality and admired being an undisputed personality of the Pakistani America Community. He said if we like to move for social change then we should learn from credible people and a couple of times he personally picked him for that reason and He proved himself esteemed dependable, credible, and capable. Mr. Tarar said we may feel fortunate that we are here tonight to say Thank you, Dr. Kazmi. After his special remarks, the organizers of the recognition event Mr. Akram Butt & Umar John of Hummingbird Art & Culture Foundation requested Mr. Tarar to present the Award of Excellence 2021 to Dr. Zulfiqar A. Kazmi on his exemplary work and leadership for the cause of Global Peace, Inter-Religious Cooperation, Human Welfare, and Media Accuracy.

Mr. Khlaid Hameed Baig a celebrated international news broadcaster highlighted the inspirational role of Dr. Kazmi as a world affairs analyst. He said we at VOA always appreciate and learn from his credible knowledge and esteemed balanced views on global current affairs. Mr. Baig highly admired his eloquence of deliverance and presentations in world media perspectives.

Dr. Syed Ghulam Nabi Fai, Secretary-General of, World Kashmir Awareness Forum talked about Dr. Kazmi’s humanitarian services and acknowledged him as a true scholar, a great humanist, a most celebrated peacebuilder, and man of wisdom. He said it’s an honor to be a part of this unique gathering. The Pakistani American community after all has realized that there is a great humanist living amongst them. He said, I truly believe that the history of Pakistani Americans was incomplete without giving due recognition to Dr. Kazmi’s contribution. Dr. Fai mentioned his passionate support for the cause of Kashmir.

Mr. Anwar Iqbal, a well-known intellectual, media personality and DAWN International News Sr. Correspondent at Washington, D.C. focused and discussed a well-accomplished role of Dr. Kazmi for Interfaith harmony and dialogue between civilizations. He said it was much needed in the US and our friend Dr. Kazmi tirelessly worked as he knew it’s a solution to all conflicts. He said we are an integral part of American Society and our succeeding generations like to understand their views being American and we must realize the facts. Mr. Anwar Iqbal said Dr. Kazmi is bridging between communities of different faiths through common grounds and its most desired mission to achieve human welfare, peace, and development.

Dr. Akbar Khawaja, a former Senator, and World Bank economist, highly appreciated Dr. Kazmi for his standpoint for global peace. He said we must be thankful to the organizers and Hummingbird forum for honoring and recognizing a most deserved Pakistani American scholar.

Ms. Nida Jamal, an associate of several local and intentional charitable organizations said, Dr. Kazmi is a leader in our community, he has a mentor to so many including me. Nida Jamal said, I recently got a quote “The measure of a man’s greatness is not the number of servants he has, but the number of people he serves. Dr. Kazmi has not only served his community but He has served Humanity.

After accepting the award of Excellence Dr. Zulfiqar Kazmi addressed the audience and appreciated the organizer for arranging such a beautiful event to honor him. He said we should trust in our people and empower our youth to bring change at all levels of society. He thankfully acknowledged views expressed by worthy speakers in appreciation of his humble efforts. He said we should listen carefully to respond to our world’s voices about us in a most responsible manner. He said the way to peace starts from us and true love is an integral part of peace. Dr. Kazmi said trust in Dialogue for sustainable peace and inter-religious cooperation. He urged the youth to move forward for humanity but must learn how you can help your Nation to make itself prominent in the line of nations. He said, our youth must have a sense of social awareness by inculcating the habit of empathy, active listening, recognizing and appreciating individual group differences. Above all, they must respect relationships and develop the habit of responsible decision-making with a sense of negotiation, conflict management, and network motivation by assimilating information, critical thinking, and in time evaluation of consequences of actions leading to the welfare of humanity. With these credentials, we can make Pakistan a prosperous nation.”
He emphasized, ’we cannot hope for sustainable development in Pakistan without peace, stability, human rights, and effective governance, based on the rule of law. Yet the nation of Pakistan is increasingly divided.

MADE HISTORY: While attending Christmas Dinner hosted by President Obama and First Lady offered Salaat Maghrib at The White House. It happened the first time in the history of The White House. Hosted First Pakistani Community event at Capitol Hill, Hosted recognition Dinner to honor Senator Hank Brown at US Capitol 300 guests among Ambassador Lodhi attended at amendment passage evening After meetings with Imam of Kaba Saudi Kingdom convened 2 interfaith conferences. One of my meeting in December 2007 with the Imam of Kaba is viewed by around 28 Million people at the website:

Convened and Hosted ISLAM IN AMERICA A SERIES OF CONFERENCE IN major cities of USA, After 9/11 co-hosted a World Peace Summit in NY in October 2001 and it was the first peace conference after tragic events.