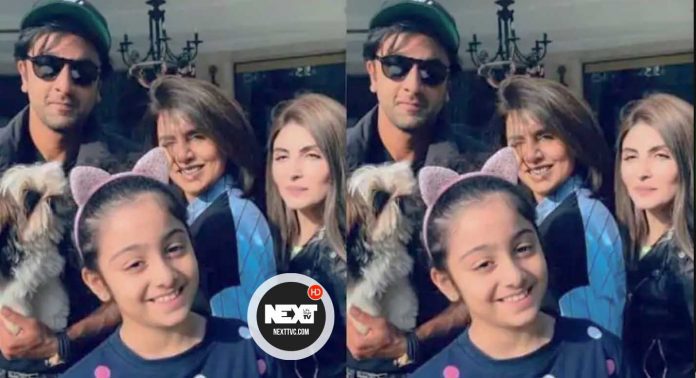 Ranbir Kapoor has turned a year older today and on his birthday, Neetu Kapoor and Riddhima Kapoor joined him for lunch. Riddhima dropped an endearing photo with her brother on his birthday and left netizens gushing over it

Actor Ranbir Kapoor, who is a heartthrob of millions of fans across the globe, has turned a year older today. The Sanju star is celebrating his 38th birthday with his family and his sister Riddhima Kapoor Sahni shared a glimpse of their shenanigans together. Riddhima and Neetu Kapoor joined Ranbir for lunch on his birthday and the former dropped a cute photo on social media. Last evening too, Riddhima shared a collage of photos with Alia Bhatt and other family members to wish brother Ranbir on his birthday.

Now, she took to Instagram and dropped an endearing family photo in which we could see Neetu and Ranbir as well. Neetu Kapoor could be seen adorably embracing her son while sister Riddhima showered love on the two as she stood behind them. The adorable family photo left everyone in awe of the family and it went viral among several fan clubs of the actor . Riddhima limited the comments on the post as she shared a birthday wish for her brother.

Riddhima wrote, “Birthday lunch Happiest Bday Rans.” Earlier, Riddhima shared the collage on her Instagram story and as a post and wished him on his birthday. Kareena Kapoor Khan and Karisma Kapoor also showered birthday love on Ranbir and shared endearing throwback photos with the Sanju star on social media on his special day.

Meanwhile, several fans of the actor have started a trend ‘happy birthday Ranbir Kapoor’ on Twitter to wish him on his birthday. Wishes have been pouring in for the actor on social media since last night. On the work front, Ranbir has several projects lined up. He will be seen with Alia Bhatt in Ayan Mukerji’s Brahmastra. Apart from this, he also has Shamshera with Sanjay Dutt and Vaani Kapoor and Luv Ranjan’s next with Shraddha Kapoor.