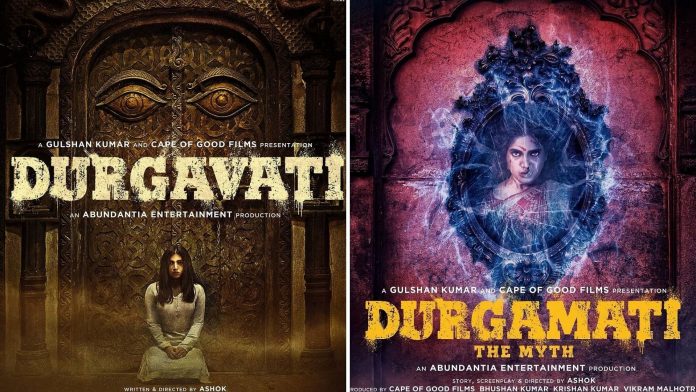 DURGAMATI is the story of an imprisoned IAS officer being interrogated in a haunted house. A state in India witnesses several robberies of priceless idols from various temples. A minister of the ruling party, Ishwar Prasad (Arshad Warsi), wins hearts of people by claiming that if the government fails to retrieve the idols within 15 days, he’ll quit politics forever. His party members are stunned with his promise. They decide to bring him down by framing him in a corruption case. CBI officer Satakshi Ganguly (Mahie Gill) is assigned for the job. She takes local help from Assistant Commissioner of Police Abhay Singh (Jisshu Sengupta).

Female-centric films get acclaim but rarely emerge as a box office success. But the scenario is changing in the last few years. The trend has also been seen down South. In 2018, BHAAGMATHIE, starring Anushka Shetty, got a brilliant response in cinemas, collecting close to Rs. 50 crore worldwide. The film was loved for Anushka’s flawless performance, script, setting and of course, the unpredictable climax. Now its remake, DURGAMATI, is ready and has released on Amazon Prime video. So does DURGAMATI manage to impress viewers as much as the original version? Or does the remake fail to impress? Let’s analyse.

As part of her operation, Satakshi decides to interrogate Chanchal Chauhan (Bhumi Pednekar), an IAS officer who has worked with Ishwar for close to a decade. Interestingly, she is serving a jail sentence for murdering her fiancé Shakti (Karan Kapadia). Moreover, Shakti was Abhay’s brother and needless to say, the latter has not forgiven Chanchal for her act.

The interrogation of Chanchal is supposed to be a top-secret operation. Hence, it couldn’t be done in the prison or anywhere else. Hence, Abhay decides to shift her to a remote location – the Durgamati Haveli. The junior officers, who are also a part of the operation, get frightened as they have heard that the haveli is haunted.

They even tell Abhay and Satakshi to shift Chanchal somewhere else. However, both the officers refuse to budge as they don’t believe in spirits. The interrogation begins and Satakshi fails to get any credible information from Chanchal that can help her nail Ishwar.

Chanchal consistently maintains that he is a man with a clean image and is far from corrupt. At night, the officers stationed at the site retreat to their hub while Chanchal is asked to reside in the bungalow all alone. This is when eerie things start happening inside. Chanchal complains but the cops are not allowed to go inside to help her.

The investigations continue in the day while at night, Chanchal continues to get attacked by a ghost. A few days later, the spirit of Queen Durgamati finally takes control of Chanchal. At first, Satakshi and other officers assume she’s faking it to escape the interrogation. However, they soon realize that there might be some things beyond the understanding of science. What happens next forms the rest of the film.

G Ashok’s story is quite novel. The idea of adding political touch in a typical haunted house plot makes for an interesting combination. On paper, this is a riveting idea, without doubt. But G Ashok’s screenplay leaves a lot to be desired. Some scenes are exceptional and keep the interest going but at several places, the film turns into a clichéd horror fest. Ravinder Randhawa’s dialogues are simple and also acidic at few places.

G Ashok’s direction is simple and commercial. The film is made for the masses and that is evident from start to finish. A few scenes are very well thought of and executed. Also, he handles the grandeur and the eerie atmosphere nicely. On the flipside, the film is riddled with too many cinematic liberties. Even the original version had the same issue but there it got saved due to Anushka Shetty’s towering performance.

A performance of that sort is missing here. The director does try to change a bit from the original and that’s evident in the last part of the film.

But one wishes he had done something more to hide the flaws and mindless aspects of the script. Also, while BHAAGMATHIE was just 2.17 hours long, DURGAMATI is lengthier with a runtime of 2.35 hours. The makers should have ideally kept the duration the same as in the original.

DURGAMATI’s first scene, of villagers dying mysteriously, seems straight out of a B-grade film. Thankfully, the film gets on track with Ishwar Prasad’s entry and when he vows to leave politics if the stolen idols are not retrieved.

The introduction of Chanchal and her dynamic with Abhay Singh adds to the drama. What is also memorable is the interrogation of Chanchal. The manner in which Satakshi tries her best to get Chanchal to spill the beans but fails is well written and thought of.

The intermission point, where Chanchal transforms into Durgamati and the scene of ‘Durgamati’ talking to the psychiatrist (Ananth Narayan Mahadevan) are very gripping. But from here, the film falls. The horror element drags a lot. The climax has a solid twist which is sure to catch many viewers unawares. At the same time, it raises many questions as well. The film ends with a hint that a sequel may be in the offing.

Bhumi Pednekar puts her best foot forward and does well in the scenes where she’s playing the part of the IAS officer. But as the ghost seeking revenge, her performance falls short. Moreover, Anushka Shetty had given a brilliant performance in the original version and sadly, Bhumi’s act fails to come any close.

Arshad Warsi, however, is a surprise and handles the part well. It’s also a pleasure to see him in a different avatar. Mahie Gill is impressive. The way she gets the grammar wrong while speaking Hindi is nicely done. Karan Kapadia does a fine job in confrontational scenes but at some places, he goes over the top. Also, his reactions could have been more natural in the romantic sequences. Jisshu Sengupta is dependable. Ananth Narayan Mahadevan leaves a mark despite being there for just a scene. Dhanraaj (Nand Singh), Brij Bhushan Shukla (Gopi) and Tanya Abrol (Peetal Devi) ham a lot. Ajay Pal Singh (Chowkidaar) is decent but his character doesn’t have anything to do after a point. Amita Vishwakarma (Kanchan; Chowkidaar’s wife) is fair. Shubhanker Dixit (Tantrik) is laughable. Chandan Vicky Rai (Daaruk), Amit Behl (Jose), Prabhat Raghunandan (Ajay Yadav) and Ada Singh (Satakshi’s daughter) are okay.

There’s only one song in the film, ‘Baras Baras’, and is soothing. Jakes Bejoy’s background score is theatrical and the theme song is chilling.

Kuldeep Mamania’s cinematography is impressive. The lensman handles the grandeur very well. Tariq Umar Khan’s production design is spectacular. The haveli is very well built and looks straight out of life. Priyanka Mundada’s costumes are appropriate. Nishant Abdul Khan’s action gets quite gory, especially in the second half. Pixelloid Studios’s VFX is okay. Unnikrishnan P P’s editing could have been better as the film is way too long.

On the whole, DURGAMATI rests on an interesting plot and is replete with some interesting scenes and an unpredictable twist in the second half. But the cinematic liberties are aplenty which hamper the impact. Also, Bhumi Pednekar’s performance is no way close to Anushka Shetty’s memorable act in BHAAGMATHIE. It will invite massive criticism from the subscribers of the OTT platform on which it has released. However, it’s sure to find an audience when it’ll premiere on satellite TV.