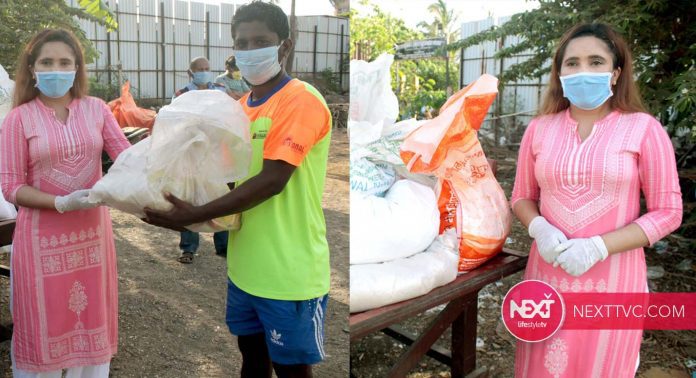 While newspapers are filled with the amount of charitable work our B-Town celebrities are doing, there’s one celeb who has been doing a lot for the people ever since the Covid scare started gripping the nation without so much as a social media share about it. It’s none other than the air-hostess turned model turned actress Kressy Singh.

The actress has been going all out to help people in need by distributing groceries, sanitizers, masks, and gloves to the needy. So much so, that it is learnt, Kressy donated her entire signing amount of a project she started shooting for just before the lockdown happened.

The actress has been following Prime Minister Narendra Modi’s journey towards fighting Covid19 and is deeply inspired by him for doing the good, she recalls how while the nation wanted to salute Modi ji, he turned to the nation saying, instead help the needy. “I deeply respect Modiji and it gives me great joy to see a smile on the faces of people when they receive the basics they are currently suffering for,” says Kressy while shying away from speaking about the donations they have been making.

“What’s there to promote this noble thing? I am just doing a small bit, the world needs so much more. I would like to urge people who are economically independent and capable to help the people in need as much as possible. It’s only then that we’ll be able to fight this evil of Corona!” Kressy further adds.

Right from featuring in TV Shows like Sasural Simar Ka, Saavdhaan India, Crime Patrol to various short films, print shoots, tv ads, music video etc, Kressy has also featured in the recent hit song Diamond Ring and just before the lockdown was also shooting for a Government Project – Khwabon Ka Karwaan. The show will be aired on DD National and has been produced by Dharamvir Singh and directed by Bhupender Singh . Helmed under the banner of Prakarti Media, Khwabon ka Karwan was shot entirely in Jammu & Kashmir.

Kressy has been inspired by this show too. In the show she plays the lead role of a girl who runs an NGO and that’s really moved Kressy to do some good in real life as well. Right from feeding the poor in her vicinity, she has also been helping the Sea Guardians from Versova to Juhu area with all their grocery needs.

Well, that’s such a noble gesture by Kressy and so needed from almost everyone who can.