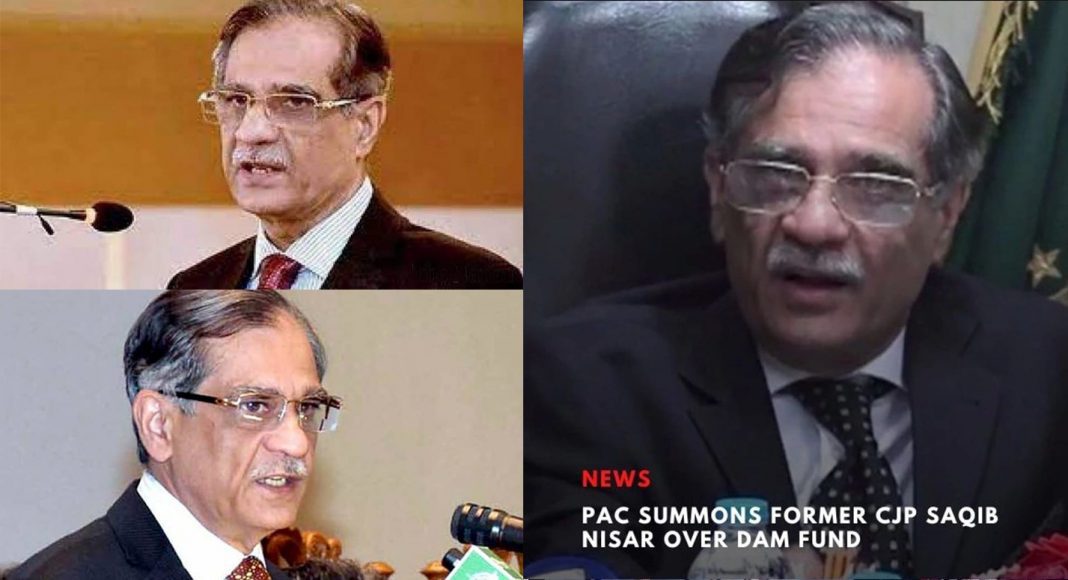 The PAC is questioning former Chief Justice Nisar about a dispute over how much money should be spent on a dam.

Azam Khan, the former principal secretary, is also wanted by this body.

The PAC of parliament summoned former top justice Saqib Nisar on Tuesday to explain the Diamer-Bhasha Dam Fund he set up.

Former principal secretary Azam Khan was issued an arrest warrant for missing the Malam Jabba and Billion Tree Tsunami meetings. It ordered the interior ministry and FIA to prevent Azam from leaving the country.

Noor Alam Khan was in charge of the PAC meeting, which asked the registrar of the Supreme Court for information about money. The fund was set up by then-CJP Nisar in July 2018 to gather money for the Diamer-Bhasha and Mohmand dams, and the Supreme Court website requested donations for their construction.

The government is attempting to have NAB’s sins forgiven. The committee chairman called Nisar a “controversial” character who was also responsible for the dam financing scandal. Noor questioned NAB Chairman Aftab Sultan about Malam Jabba. The NAB chief said it was closed during Javed Iqbal’s tenure. Claiming Iqbal was “blackmailed,” the PAC chief ordered a review of all his cases. The NAB chairman told the committee that a Rs 32.86 billion loss was reported as a Rs 26 billion profit.

The project cost Rs 49 billion and rose to Rs 69 billion, he said. “Irregularities were uncovered in awarding Peshawar BRT contracts,” he said. The Peshawar High Court is also investigating, he said. The Supreme Court ordered an injunction while the NAB inquiry was ongoing. Ex-PM Imran spent Rs 70 million on the KP government’s helicopter, according to NAB. Sultan told PAC that NAB was recovering the money. The PAC chairman said the helicopter’s users should pay for the damage. He directed the NAB chief to contact the ECP.

The NAB chairman said the Broadsheet case included $3.7 million in 2010. The matter was referred to the FIA in April 2021. FIA officials informed the committee that NAB declined to appear before the agency since it was not authorized to investigate the case. After that, case progress halted.

The PAC wanted an FIA report within a month.

After losing in court, Pakistan paid $28.706 million to Broadsheet LLC. The money was delivered from the Pakistan High Commission to the asset recovery agency on behalf of NAB 21 years after it was appointed to uncover hundreds of Pakistanis’ purported offshore properties. The PAC chief stated that NAB officers’ asset declarations were requested.

Sultan said NAB rules were changing. Under the new laws, anti-graft officers’ assets must be revealed. Noor said all officers gave the Establishment Division asset declarations. The NAB CEO said the same thing about asset declaration. He said assets were only opened by inquiry or judicial order. Noor and Sultan argued over this. The new NAB chief won’t reveal the officers’ assets. The committee chairman asked if you’d provide documentation.

The NAB chairman asked what he wanted. Noor was furious and brought the cabinet, the Establishment Division, the law secretary, and the IGP of Islamabad to the PAC. Later, the NAB director acknowledged the agency’s reports to the Federal Board The matter was dismissed after the PAC received the FBR.