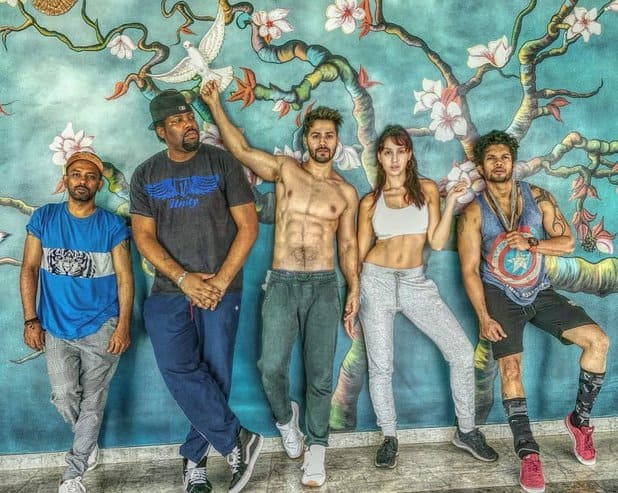 Street Dancer 3D is one of the much awaited films of 2020. Starring Varun Dhawan, Shraddha Kapoor, Nora Fatehi, Prabhudheva and others, the film is helmed by Remo D’souza.

Varun Dhawan has been adding to the excitement of his upcoming film, Street Dancer 3D over the past few months by sharing photos and videos from the shoot. The film will reunite Varun and Shraddha Kapoor on screen post ABCD 2. Helmed by Remo D’souza, Street Dancer 3D is touted to be one of the biggest dance films of India. A number of choreographers and dancers will be introduced in the film. Varun is turning no stone unturned in gearing up for his role in the film. Be it gymming or dancing, Varun has been working very hard.

A result of his hard work reflected in his latest Instagram post in which Varun can be seen showing off his chiselled abs. The Kalank star took to Instagram today to share a photo in which we can see him posing with his co-stars in the film. Standing beside, Nora Fatehi, Dharmesh, Tashan Muir and Sushant Pujari, Varun showed off his swag and well-toned body. Nora could be seen sporting a casual look in a white sports bralette and a pair of grey bottoms.

Varun went shirtless for the pic while other stars were also dressed in a casual way. The Street Dancer 3D star captioned the photo with a crown emoji and wrote, “The Royals.” Over the past few days, Varun has been working out at the gym as well as at the Pilates class to gear up for the final battle of Street Dancer 3D.

Meanwhile, Shraddha Kapoor is away in Europe shooting for her film with Prabhas, Saaho. Once she is back, Street Dancer 3D will shoot the final battle of the film. As per reports, 20 real dancers in the film will dance it out with Varun and Shraddha. It is a third film in the series of Remo D’souza’s dance films. Street Dancer 3D has been shot in Amritsar, Dubai and London. Also, Varun performed at the Wagah border back in January when the film went on floors. Street Dancer 3D is slated to release on January 24, 2020.