Press Conference of the upcoming movie Total Dhamaal was held at Le Meridien, Delhi. The star cast Ajay Devgn, Madhuri Dixit, Anil Kapoor, Riteish Deshmukh, and director Indra Kumar was present at the event. They shared their experience of working in the movie and spoke about the roles they are playing. Total Dhamaal is an adventure comedy and the third installment of Dhamaal series. The movie will be released on 22 February 2019. 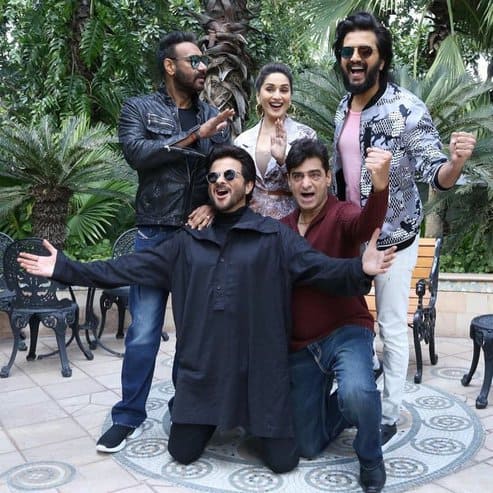 Talking about his experience of working in the movie, Ajay said, ” We all are playing the role of crazy people in the movie. While shooting I had great fun and in many scenes, I couldn’t stop laughing.” When asked about the content of the movie he added, ” It is very hard to make people laugh. You can’t laugh at one joke twice. Our team has worked hard on the script of the movie to entertain the audience. I hope the audience will appreciate it.”

Present at the event, Madhuri spoke about her role in the movie and comedy content, she stated, ” I am playing a role Maharashtrian girl in the movie who got married to a Gujarati boy(Anil Kapoor) who both are chasing money in the movie. I had a great experience working again with Indra Kumar and all my co-stars on the sets .”