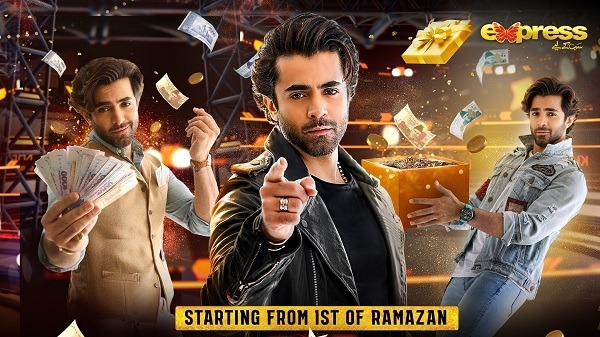 Celebrity Sheheryar Munawar has worked hard to build his reputation and is well respected. It’s hardly unexpected that he made the leap from television to the big screen after a string of impressive performances on screen. It doesn’t take much for admirers to fall in love with Sheheryar.

His first ever game show, Khel Ke Jeet, is being hosted by Sheheryar Munawar right now. There’s a LOT to unpack, to put it mildly. Audience members may win cash rewards and other prizes by taking part in a variety of amusing, strange, and downright insane “challenges,” much like Jeeto Pakistan. Fans may win anything from washing machines, LED televisions, and even a block of land in Bahria in Khel Ke Jeet!

Major Usama from Sinf-e-Aahan is the perfect presenter for this program since he exudes the same level of irrational enthusiasm as the rest of the cast. Check out the opening video.

We get the impression that Sheheryar is channeling his “inner Fahad Mustafa” via his loud pranks and intensity. It’s clear that the actor is doing all he can to get the audience involved in the activities.

Even if it was only dancing with the participants, the actor gave it all he had. Here’s the whole first episode for your viewing pleasure.