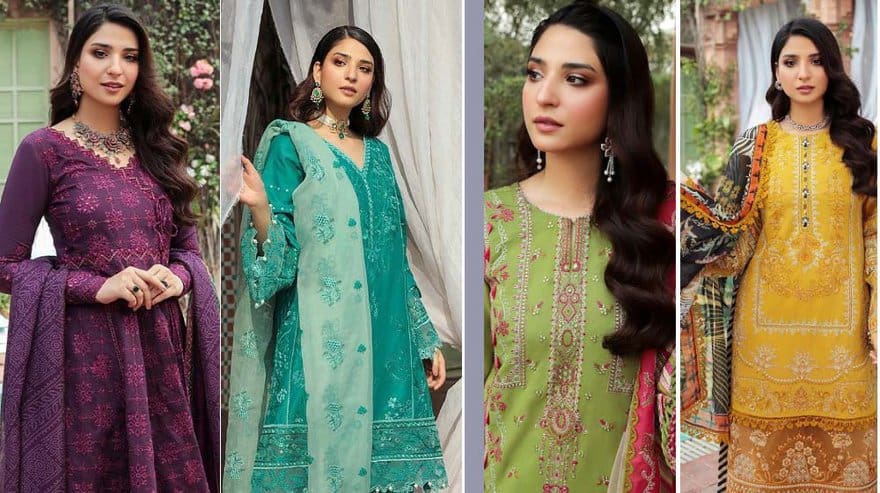 Ramsha Khan is a fashion icon in show business. It’s almost Eid, so you can rely on the Sinf-e-Aahan star. From their Eid collection, the 27-year-old teamed with Motif. It’s worth a look!

In order to complete the look, the schiffli shirt is adorned with embroidered organza that matches the embroidered pallu on the organza dupatta.

It’s easy to pull off a subtle appearance with this soft shade of rose pink. The flowery design on the ethnically embroidered shirt can be seen.

Its deep yellow tone evokes images of endless mustard fields, making it an ideal choice for the hot months ahead. A panni border contrasts with the shirt’s elaborate embroidery. Adding a dash of subtlety to the otherwise vivid ensemble is the patterned dupatta.

It’s a perfect summer hue, and the shirt’s self-pattern is enhanced by the use of embroidery.

Ramsha Khan is a rising star on Pakistani television who is swiftly earning a significant social media following. The entertainment world has taken notice of the gifted actress in a very short period of time. Thora Jee Le, a coming-of-age film, is where she made her acting debut. Mah-e-Tamaam Khud Parast, Kaisa Hai Naseeban, and Ishqiya are just a few of Ramsha’s notable television roles.