Embassy of Pakistan, Washington D.C. held a virtual event on 22 March 2021 to mark the National Day of Pakistan. Mr. Derek Chollet, Counselor US Department of State and Senior Advisor to Secretary of State was the Guest of Honor at the event. Senator Chris Van Hollen [D-MD], Rep. Sheila Jackson [D-TX], Rep. Tom Souzzi [D-NY] and Rep. Jim Banks [R-IN] participated in the event though video messages. Officials from the State Department and the member of the Pakistani American community also joined the event.

In his remarks, Ambassador Asad Majeed Khan highlighted the significance of the National Day in reaffirming our commitment to the ideals and vision of our founding fathers. He said that the new and transformed Pakistan was focused on economic security, with a foreign policy geared to deliver peace and security for its people. Pakistan’s geographical location, demographic dividend, democratic orientation, rich human and natural resources and improved security situation enabled it to become an economic and transit hub and melting pot of global interest.

Terming peace in Afghanistan as an important convergence between the US and Pakistan, the Ambassador emphasized on working together to facilitate the peace process for achieving an Afghan-led and Afghan-owned inclusive political settlement. He also highlight Pakistan’s peaceful overtures towards India and said that the onus was now on India to demonstrate seriousness in pursuing peace in the region and create enabling environment for meaningful dialogue on all outstanding issues including the core dispute of Jammu & Kashmir.

Speaking on Pak-US relations, Ambassador Khan said that Pakistan looked forward to building a stand-alone, broad-based and enduring partnership with the new Administration. He said that the relationship drew strength from key enablers including strong people-to-people ties, mutually beneficial businesses and economic linkages, shared values and principles and common interest in promoting peace and stability in the region. He stressed on further enhancing trade and business ties by building business-to-business linkages between the two countries. The Ambassador also praised the role of the Pakistani-American diaspora and their valuable contributions towards providing a solid foundation for a strong Pakistan-US partnership.

Mr. Derek Chollet, Counselor US Department of State and Senior Advisor to the Secretary of State extended felicitations on behalf of the Secretary of State and the American people on the National Day of Pakistan. He said that the US government looked forward to close cooperation with Pakistan to address common challenges, including ending the long conflict in Afghanistan, defeating the scourge of terrorism; combating the Covid-19 pandemic; addressing climate change; and deepening bilateral trade and investment ties.

Mr. Chollet also highlighted the importance of a peaceful, stable and prosperous Afghanistan for the US and Pakistan. He said that close cooperation on ending the war in Afghanistan and fighting the scourge of terrorism was the way forward to unlock the true potential of the Pakistan-US partnership. He added that peace in Afghanistan would also benefit Pakistan given its strategic position as a connectivity hub in South and Central Asia.

Speaking on Pakistan-US trade ties, Mr. Chollet said that the trade between the two countries touched new heights in 2020, exceeding US$ 6.8 billion despite the economic challenges posed by Covid-19.

Pakistan’s economic assets such as a mature industrial sector and large, young, English-speaking population could attract greater US investment. He also highlighted the deep and multifaceted people-to-people ties between the two countries, with Pakistan having one of the largest US government’s exchange portfolios benefitting both countries through projects such as Parallel Pandemic Project, a US-funded university partnership between researchers at George Mason University and the University of Karachi, examining the impact of Covid-19 in both countries. He also spoke about the US Pakistan Women’s Council and the important work it has done to foster women’s workforce participation, entrepreneurship and access to education, helping to expand bilateral cooperation on the economic front.

Senator Chris Van Hollen in his video message said that the people of Pakistan and the US shared common aspirations based on guiding principles of fraternity, equality, and liberty envisioned by Quaid-e-Azam Muhammad Ali Jinnah.

He highlighted the importance of US-Pakistan cooperation to achieve a negotiated settlement in Afghanistan, which fully respects the rights of all Afghans. Emphasizing on economic growth and prosperity for the long-term stability of the region, Senator Hollen said that he would be introducing bipartisan legislation in the US Senate that would provide trade and economic opportunities for the US, Pakistan, and Afghanistan. He also lauded the valuable contributions of Pakistani Americans to enrich every part of American life.

Rep. Sheila Jackson Lee, Chairperson of Congressional Pakistan Caucus, said that Pakistan and the US had been longstanding friends and partners sharing democratic values as well as aspirations of our peoples to lead better lives and build a peaceful and prosperous world. She recalled the visit of Prime Minister Imran Khan to the US in July 2019 that strengthened close partnership between the two countries and looked forward to the opportunity to host him again in Washington.

She also commended the spirit of entrepreneurship of the Pakistani-American diaspora, contributing to the development and progress of the US, particularly their philanthropic efforts in times of the Covid-19 pandemic. She specifically mentioned the contributions of Pakistani-American doctors during hurricane Harvey and the pandemic.

Rep. Tom Souzzi, Co-Chair of Pakistan Causcus, and Rep. Jim Banks lauded the contributions of the Pakistani-American diaspora, particularly medical professionals and healthcare workers, for helping the communities in the US during the Covid-19 pandemic.

The event was live-streamed on the Embassy’s social media platforms. 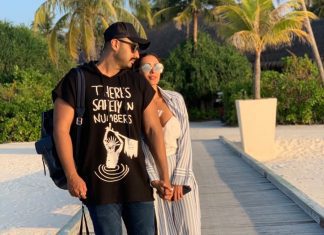 Sajjad Ahmed - June 30, 2019 0
Malaika Arora recently made it Instagram official with Arjun Kapoor and looks like it's his turn now. Arjun and Malaika, who are currently holidaying...