Jaaved Jaaferi’s son Meezan Jaaferi and Sanjay Leela Bhansali’s niece Sharmin Segal will be making their debut this year with Malaal. Today, they came together to launch the song ‘Udhal Ho’ and it was indeed a festive affair. 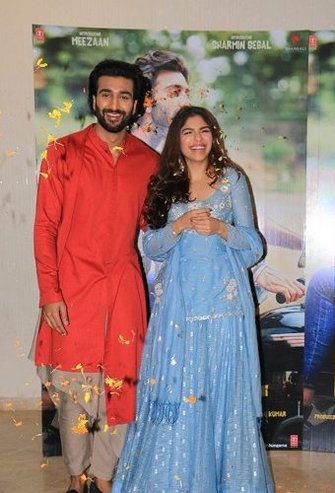 The year 2019 has already seen two new entrants with a big banner production house backing them and now a set of another newbies is set to step foot in the Hindi film industry. Jaaved Jaaferi’s son Meezan Jaaferi and Sanjay Leela Bhansali’s niece Sharmin Segal will be making their debut this year with Malaal. The film’s trailer released a while ago and one song from the movie is already out. Today, the debutants came together to launch the second song from their film titled ‘Udhal Ho’ and it was indeed a festive affair.

The song launch event was held in Mumbai and Sharmin and Meezan arrived in a taxi which had a huge placard displaying the film’s release date. Just before the duo could enter the venue, they danced to the beats of dhol and showcased some filmy moves. The danced away and flashed their widest smiles as the paparazzi snapped them. Inside the venue, Meezan was in character as he went down on one knee and even lifted Sharmin.

Speaking about the song ‘Udhal Ho’, it is filmed during the festival of Ganesh Chaturthi and the two stars’ sizzling chemistry is very much on display. The song’s festive fervour hits the right note and in the first hour of the song’s release it garnered quite a few positive reactions. Dressed in complete traditional attire, Meezan and Sharmin are smitten by each other in the video. With a touch of Marathi lyrics, we can totally expect the song to be played on loop at the festival of Ganesh Chaturthi this year.