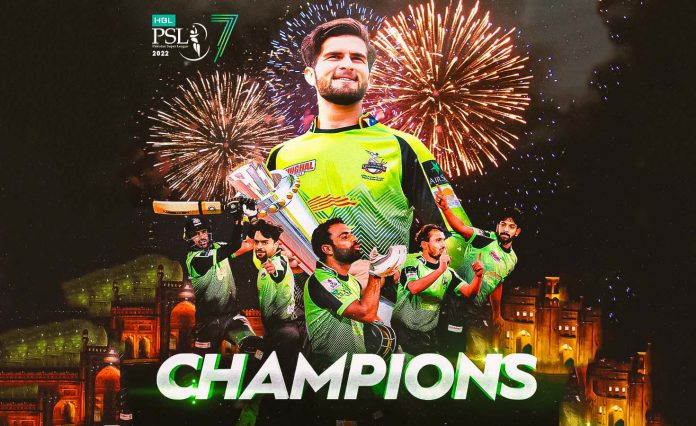 With Shaheen Shah Afridi leading the Qalandars’ bowlers with three wickets, Multan Sultans were bowled out for 138 by Qalandars.

Two wickets apiece were taken by Mohammad Hafeez and Zaman Khan, while Haris Rauf and David Wiese each took one.

When the Qalandars elected to bat first, Wiese and Harry Brook’s late onslaught helped them reach 180-5 in the stipulated 20 overs. When it mattered most, these two were on fire and helped propel their team to victory in the championship game.

To make matters even worse, the hosts lost three wickets for only 25 runs earlier in the day when Abdullah Shafique, Zeeshan Ashraf, and in-form batsman Fakhar Zaman all fell cheaply.

As the innings progressed, experienced batsman Hafeez led the innings with a gutsy performance, partnering with Kamran Ghulam for 54 runs. Kamran returned to the pavilion after trying to hit the ball over the bowler’s head, making the partnership seem more at ease at the crease.

Even though Hafeez kept on going, Kamran was only able to score 15 off 20 balls. However, he left in the 18th over after trying to speed things up. He smashed nine boundaries and a six in a 69-ball innings, with a high score of 69.

Brook and Wiese’s cameos in the last 16 balls of the game swung the momentum of the match in the direction of victory. A boundary and three sixes helped Wiese to a quickfire 28 off eight balls, while Brook struck an unbeaten 41 off 22 balls with the assistance of two boundaries and three sixes.

Afridi took three wickets for the Sultans, while Shahnawaz Dahani and David Willey each dismissed a batsman.