who was last seen in Batti Gul Meter Chalu is all set to feature in Kabir Singh- a Hindi remake of the Telugu superhit movie Arjun Reddy. He is sharing screen space with Kiara Advani in the same. The promo was released around a month back and was well received by the audiences. In the same, we get to see the dual avatar of Shahid. In one, he is the simple guy-next-door and in another, he is as an intense and alcoholic, cocaine snorting doctor who indulges in fights if someone rubs him off. And now, the full-fledged trailer has been released. Check out the trailer right below. 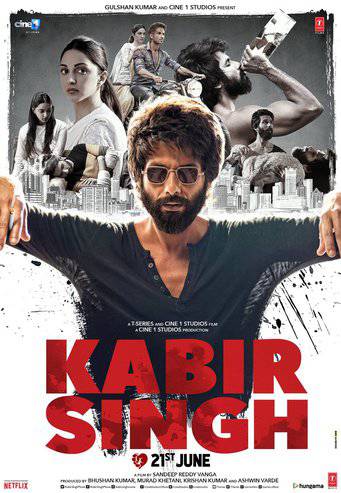 The trailer opens with Shahid Kapoor as an alcoholic and drug-snorting doctor who has anger management issues and tries his best to forget his former partner Preeti (Kiara) and goes on the path of self-destruction. Later, we get to see his other sane avatar of Kabir Singh. We get to know how he meets his girlfriend in college and how he is madly in love with her and is overprotective about her. By the end of the trailer, we get to see his rebel avatar.

Talking about the movie, the same is directed by Sandeep Reddy Vanga and produced by Bhushan Kumar, Murad Khetani, Krishan Kumar and Ashwin Varde. The original blockbuster starred Vijay Deverakonda and Shalini Pandey in the leading roles. The story revolves around a successful young medical surgeon, who later becomes self-destructive when his lady-love is forced to marry someone else. The movie went on floors last year in August and will hit the screens on June 21, 2019.

The much-awaited trailer of Kabir Singh hit the Internet on Monday and it wouldn’t be wrong to say that it was worth the wait. The two-and-a-half minute video showcases the story of Dr Kabir Rajveer Singh, who happens to be a stubborn and a self-destructive man whose love for Preeti ( played by Kiara Advani) has no boundaries. It wouldn’t be wrong to say that Shahid Kapoor’s intense persona stands out as a clear winner in the trailer. Kiara’s childlike innocence and the crisp, well-written dialogues also demand everyone’s attention.
The trailer begins with Kabir Singh asking about a girl at a clinic. Throughout the course of the video, we discover that Kabir Singh is very, very angry and that his relationship with Preeti is as toxic as his habits. The makers of Kabir Singh shared the film’s trailer on YouTube and wrote: “His love has no boundaries and passion that makes him unstoppable. Meet Dr. Kabir Rajveer Singh!” The video has over 5 lakh views on YouTube as of now

Kabir Singh, slated to release on June 21, is a Hindi remake of the 2017 Telugu hit film Arjun Reddy, starring Vijay Deverakonda and Shalini Pandey. Just like the original rendition, Kabir Singh will also be directed by Sandeep Vanga.