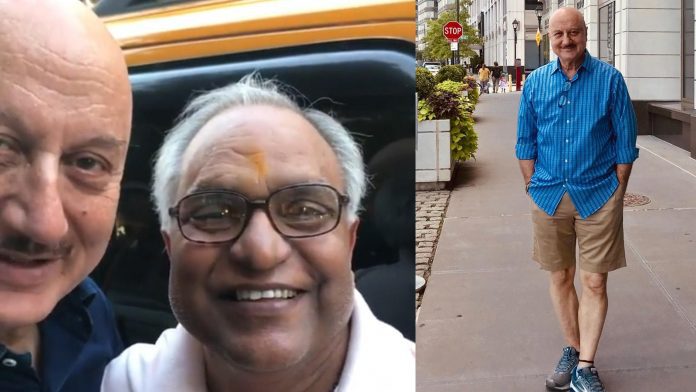 Anupam Kher is pretty active on social media and often shares updates from his daily life with his fans. From videos to photos, the senior actor never fails to give his followers a peek into his personal and professional life. Earlier today, he shared an endearing video of an Indian cab driver in New York City, who initially did not recognize Anupam, and was overwhelmed when he finally did.

In the video, Anupam can be seen speaking to Jugal Kishore, who is a cab driver in the American city, and ferried the actor today without realizing who he is. Anupam captioned the video, “Encounters in NY: #JugalKishore Ji from Panjab, a yellow cab driver in NY for 30years didn’t talk to me throughout my ride with him. He didn’t recognize me. Later he gave me the most flattering and the funniest reason for it. He kept hugging me. We were both happy. And as always no fare was charged. #IndiansInNY #Generosity #LifeLessons”

In the video, a pleased Jugal Kishore can be seen revealing that he did not recognize Anupam because after losing oodles of weight the actor is looking “like a boy who is 20-25 years old”. But finally, when he did recognize him, he said, “Ab toh bahut achcha lag raha hai. Aisa lag raha hai jaise bhagwan ke darshan ho gaye (now I am feeling good. It feels like I have seen god).”

The cab driver also shared with the actor that even though he has been driving a cab in New York City for over 30 years now, he still misses home. “India mein jo maza hai, yahan toh hai nahi (the kind of fun there is in India, you won’t find it here),” said Jugal Kishore who has a home in Gurugram.

On the other hand, Anupam is currently in NYC to shoot for the second season of NBC’s medical drama TV series New Amsterdam. He plays the role of a neurologist Dr. Vijay Kapoor in the show.