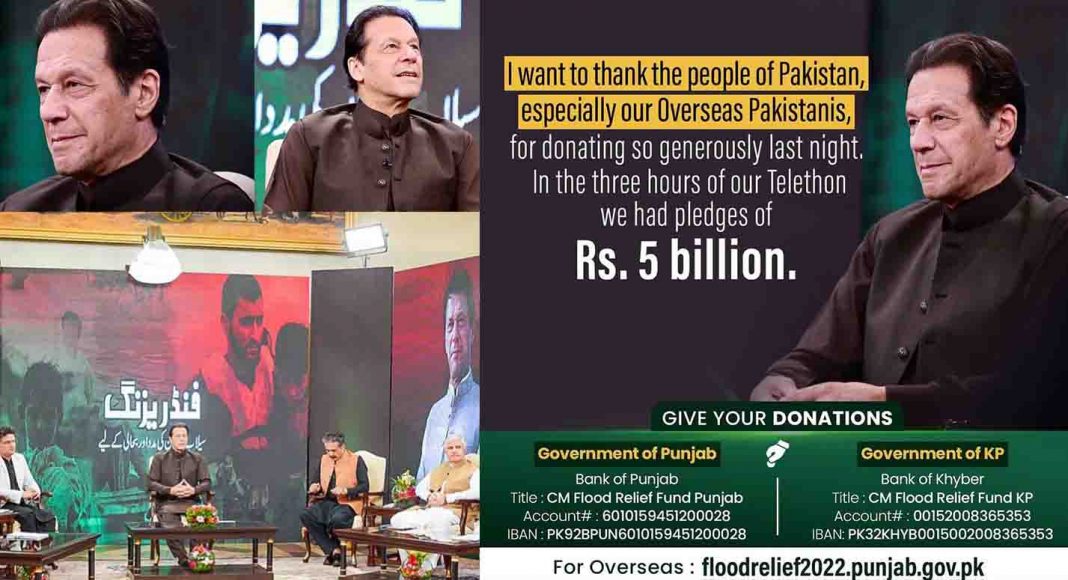 Imran Khan, who used to be prime minister and is now the head of the PTI, held a telethon on Monday to raise money for flood victims.

Senator Faisal Javed Khan, who served as the event’s moderator, reported that the former prime minister raised more than Rs 5 billion during the three-hour long flood telethon. Pervaiz Elahi and Mahmood Khan, the chief ministers of Punjab and Khyber-Pakhtunkhwa, participated in Imran Khan’s telethon. So did Sania Nishtar, the former assistant to the previous prime minister on social protection, as well as celebrities and other politicians.

The PTI leader stated that all of Pakistan was impacted by the flooding caused by consecutive days of monsoon rainfall during a live telethon that was broadcast on multiple television networks, including ARY News. Damages are expected to exceed Rs1,000 billion, and he estimates that over 1,000 people were killed.

More dams, he warned, would be needed to protect people in the future from such destruction. Dam construction is “the only solution” to averting flood disasters.

Boxer Amir Khan, of British and Pakistani descent, donated Rs 5 million (about $70,000) to the telethon’s flood relief fund. Sardar Tanveer Ilyas Khan, Prime Minister of Azad Jammu and Kashmir, made an announcement of Rs 30 million to help those who have been affected by the recent floods. Khan joined PTI’s live telethon telecast.

A well-known journalist named Sabir Shakir has offered to give Rs 500,000 to help those who have been hurt by the floods. Many Pakistanis living abroad called the telethon to make donations to help the flood victims. Imran Khan took their calls.

The number of those killed by floods is rapidly approaching 1,100.
Many millions of people in different parts of Pakistan were dealing with the worst monsoon floods in a decade, which had washed away their homes, damaged important agriculture, and threatened to overflow the banks of the country’s main river.

Over a thousand people have perished since the seasonal rains began in June, according to NDMA data, but the final toll might be higher because hundreds of settlements in the hilly north have been shut off because of flood-swollen rivers that wiped away roads and bridges.

Sajjad Ahmed - February 25, 2020
The summer heat and sweat are bound to make your oily scalp only worse. Here are the easiest ways to maintain it. An oily scalp...