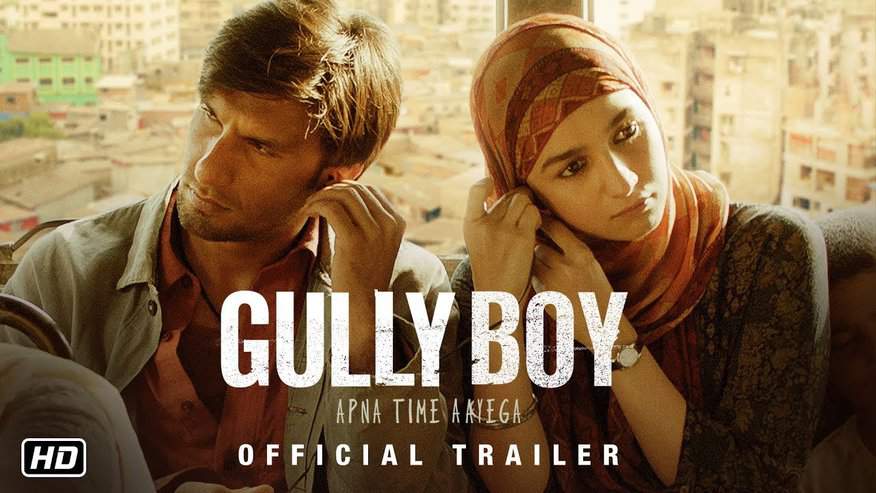 Despair and drudgery hound Murad Ahmed (Ranveer Singh), the protagonist of Gully Boy, Bollywood’s first true-blue street rapper musical. The Dharavi boy’s enervating frustrations translate into a simmering rage, which he then channels into caustic hip hop harangues. Kyun lagta hai yeh bustee ek andha kuan hain (Why do I feel this slum is a dead end), he writes in his worn-out notebook. That line is a rhetorical question. The answer is blowing in the wind.

Murad, caught in a cycle of poverty and bleakness, recognizes – and embraces – rap poetry as a ticket out of the hellhole he calls home. But there’s no poetry in his perfunctory life in a cramped tenement. His snappish father (Vijay Raaz), who has brought home a second wife without so much as a by your leave, is a chauffeur who hopes education will set his son free. But Murad, who attends college lectures when he isn’t on clandestine dates with his fiercely possessive girlfriend Safeena Firdausi (Alia Bhatt) or hanging out and occasionally apathetically flouting the law with his pals Moin (Vijay Verma) and Salman (Nakul Sahdev), has other ideas.

The principal conflict point in Gully Boy, written by Reema Kagti and director Zoya Akhtar, is predicated on the seemingly unbridgeable gap between Murad’s ‘khwaab’ (dream) and the overwhelming ‘aaju baaju ki asliyat’ (the reality around him), which his defeatist father never tires of reminding him of. Late in the film, the titular hero’s maternal uncle (Vijay Maurya, also the film’s dialogue writer) verbalizes the boy’s destiny: “naukar ka beta naukar banega (a servant’s son can only be a servant)”

Gully Boy is unconventional in terms of its setting and the larger issues of class perceptions and social prejudices that it addresses, but its central narrative constructs – a defiant underdog fighting daunting odds in a bid to become a rap star – traverses familiar ground. Gully Boy does not subvert the conventions of the genre, which restricts the game within a predictable arc.

The hero asks the hijab-wearing Safeena, playing on the meaning of his own name: Koi bada murad dikh jaaye toh try karu ki naa (If I have big desire shouldn’t I give it a shot)? Again, it isn’t really a query. It is an assertion of intent. Who could have packed more vivacity into the character of the discontented slum-dweller-turned-rapper than Ranveer Singh, a proven purveyor of larger-than-life prototypes, be it a perniciously ‘savage’ Muslim ruler (“Padmaavat”) or a virile, cynical cop mutating into a savior of women wronged (Simmba)?

The lead actor, who hasn’t had to rein in his trademark exuberance to this extent since Lootera, brings quiet conviction to bear upon an impressively modulated performance. He is well supported by Alia Bhatt (feistiness personified as a doctor’s independent-spirited daughter) in a cast that includes Kalki Koechlin (in a rather sketchy cameo as Shweta/Sky a Berklee College of Music alumnus who helps Murad record his first video), Amruta Subhash (as Murad’s mistreated ammi) and newcomer Siddhant Chaturvedi (so splendid as MC Sher, the rapper who mentors the hero through his early phase of diffidence, that he oftentimes comes excitingly close to upstaging Ranveer).

When called upon to do so, Ranveer dramatically amps up the energy. It is, therefore, easy to be swept up in the film’s rambunctious, staccato rhythms, both auditory and visual. This rap musical, however, has an overly moderated feel, which in the case of most films would be deemed a strength, but here it tends to lower the intensity somewhat.

The gloss that clings to the surface of Gully Boy like a shrink wrap robs it of the kind of spray-can art spontaneity that drove Wild Style (1983), America’s first true hip-hop movie, as well as of the sustained grittiness of Hustle & Flow (2005), the only Hollywood rapper drama to fetch its lead actor an Oscar nomination and a hip-hop group (Three 6 Mafia) a statuette for Best Song.

That is not to say that Gully Boy isn’t consistently watchable: it is a potentially hard-hitting tale that turns into a star vehicle for Ranveer to revel in. Revel in the opportunity he does, bringing to the role his typically high level of enthusiasm but tempering it with a certain restraint to convey the character’s inner turmoil.

Given the fiery quality of some of the hip-hop lyrics, not the least of which is Dub Sharma’s subversive Jingostan, Gully Boy’s tone isn’t abrasive enough to provoke and disturb. At its best, it sparks emotions, but the impact remains largely on the surface. When MC Sher and his boys belt out the Jingostan hook “Pakdo, maaro, kaato, cheer do” and allude to the venom spewed by a “zehreeli been (poisonous reedpipe)”, we expect a fusillade of powerful politically loaded punches in the rest of the film. What we get instead are mere dribbles of censorious jabs.

This lively take on a young man’s struggle to rise above his station in life – it’s a tale inspired loosely by the experiences of real-life Mumbai street rappers Naezy and Divine, both acknowledged upfront in the credits – is informed with empathy and solidarity. The drama is located in a milieu that is summarily marginalized in mainstream Mumbai movies except when the spotlight is on radicalization and terror plots. This immediately separates Gully Boy from the ABCD series of dance movies and lends it social acuity. Despite being overlong, the film is an undeniably entertaining, even rousing, portrait of a robust life forged by adversity, tenacity and the courage to dream.

Gully Boy delivers a nudge here and a wink there rather than all-out hammer blows. The hero and his ilk sing about personal challenges, societal ills, and perfidious politicians, but steer clear of outright provocation. Even the Azaadi number, appropriated from a political arena occupied by free-thinkers alarmed at the multiple systemic ills that beset the nation, is overlaid on sequences of Murad and his automobile repairman-mate stealing cars, sails by without stirring the pot too much.

Murad’s street patois is convincing enough. But given the softening of the angry soul of underground rap, how authentic and exhaustive a reflection of Mumbai’s street sounds is the hip-hop that we hear in the film? The adroit directorial touches and the generally thoughtful writing, best reflected in the delineation of the hero’s romantic interest, create an ambiance in which it is easy to lose sight of the fact that the angst of the have-nots may have been window-dressed a tad out here for mass consumption. Well, to be fair, the film has a telling sequence in which Murad is dragged by Sky and a couple of her associates into defacing departmental store windows with strategically drawn graffiti. I didn’t know you are into art, too, Murad remarks. This isn’t art, it’s ‘Jung’ (war), Sky replies. The film doesn’t evolve into one.

In an era of which Bollywood is increasingly passing off pulpy apologies for demagoguery for cinema, Gully Boy could have been a fitting riposte. It just doesn’t go far enough to pose discomfiting questions in keeping with the art of the street rapper. But all said and done, Gully Boy can be whole-heartedly commended for its craft, fascinating characters, and RANVEER SINGH. He absolutely kills the slow-burning rapper act. What’s more, he does with a lot of energy to spare.

If there is one film for which the audiences are eagerly waiting, it is Zoya Akhtar’s Gully Boy. Starring Ranveer Singh, Alia Bhatt, and Kalki Koechlin, Gully Boy is the story of a slum boy named Murad who has a passion for writing and rapping. However, his circumstances like his father’s resistance and his poverty come in the way of his passion. How Murad overcomes the obstacles to follow his heart is the story of the film. Playing Ranveer’s love interest in the film is Alia Bhatt as Safeena.

Last night a celebrity screening of Gully Boy was held where many prominent names from the industry were in attendance. After watching the movie, many have expressed their views about Murad’s story on the social networking site Twitter. As per many of the celebrities, Gully Boy is by far Ranveer Singh, Alia Bhatt, and Zoya Akhtar’s best performance. Many of the Bollywood actors and film-makers have praised the newcomer Siddhant Chaturvedi.

From Rahul Bose to Shankar Mahadevan to Divya Dutta, everyone has been in awe of the film and have urged the people to go and watch it. Rahul Bose tweeted, “Few more words on #GullyBoy. @RanveerOfficial finest work yet. Contained yet free, nuanced yet explosive.

@aliaa08 A brilliant, achingly true performance, your heart breaks. The rest of the cast were perfectly pitched. Take a bow @jayoza: brilliant camerawork in a complex film.”

Check out the Bollywood reaction to Gully Boy:

Role reversal just for fun. @RanveerOfficial at his arthouse, understated best. Me in my single screen avtar. #GullyBoy #aboutlastnight pic.twitter.com/36Xn4AyNwi

Watched #GullyBoy yesterday. It takes you into a world you know nothing about & makes you care for its people, their lives, their futures. What more can an audience ask for? Superbly directed, spot on performances, great emotional highs and lows. And banging rap – music & lyrics.

Few more words on #GullyBoy. @RanveerOfficial finest work yet. Contained yet free, nuanced yet explosive. @aliaa08 A brilliant, achingly true performance, your heart breaks. The rest of the cast were perfectly pitched. Take a bow @jayoza : brilliant camerawork in a complex film.

#Gullyboy is the perfect example of a great Hindi film: it is an extremely enjoyable watch, an incredible story, perfectly cast and marvellously directed. @RanveerOfficial @aliaa08 @ZoyaAkhtarOff @FarOutAkhtar @ritesh_sid congrats to all of you for pulling off such a great feat!

The #GullyBoy fan club! #ZoyaAkhtar you’re a genius! How do you out do yourself each time? Every performance, every scene, the music, the camera work, the writing ❤️ @RanveerOfficial so contained yet so explosive. This one is undoubtedly your best. @aliaa08 fabulous as ever! pic.twitter.com/WQL9StltyU

@RanveerOfficial and how good are you in #gullyboy???you are giving brilliance another definition!! So sweetly you asked me, are you proud of me?? Well , do you give a choice?? You are the best sweetheart!! Keep rocking!

@RanveerOfficial Noone could have done it better!!!! Woke up with #GullyBoy on my mind!! You're simply the best! 😍

With the performances of Ranveer, Alia and other members of the cast being highly appreciated, audiences’ expectations from Gully Boy are soaring high. The songs from the film are already trending on all musical platforms and the latest song Azadi has become a youth anthem. At the Berlin Film Festival, Gully Boy’s tickets were sold out as soon as they came online and Ranveer, Alia, and Zoya were greeted by a massive and enthusiastic crowd. Now, we just can’t wait to see the film which is slated to release on February 14, 2019.