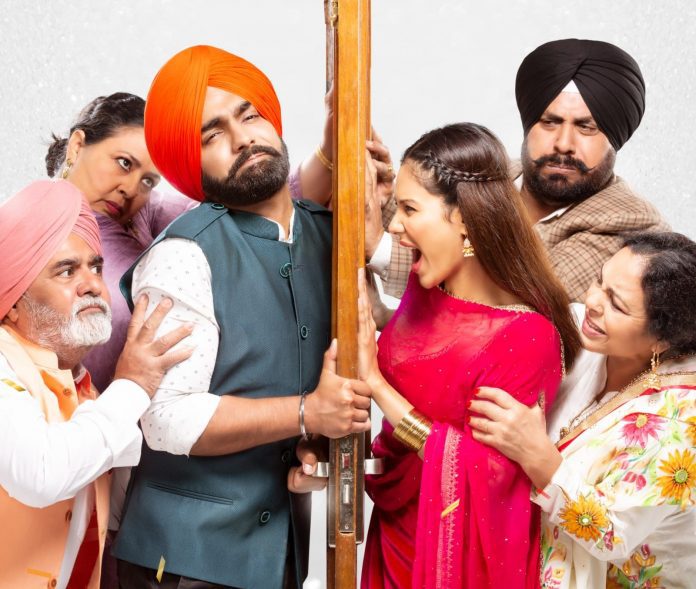 Ever since Ammy Virk and Sonam Bajwa’s Punjabi film Puaada was announced for release it’s been a craze with audiences who have lapped up all things of this comedy entertainer!! The trailer of the film has touched 1 crore views alone, while the songs combined have hit the 2 crore benchmark!! The songs are currently blasting on radios and on mobile phones all across the region as audiences are eager to see their favorite jodi of Ammy Virk and Sonam Bajwa on screen for the fourth time!!

The makers launched all the film’s content and posters in such a frenzy that it’s trending on movie search engine site IMDB where it’s the 7th most trending film nationally!! It’s on this list amongst such biggies like Bhuj and Bell Bottom!! This is for the first time that a Punjabi film has made it to a national most anticipated list and that’s quite an achievement! This just shows the anticipation and craze amongst the audiences not just only in Punjab but all across the country!

Finally, after a year and a half of waiting, Punjabi audiences worldwide can now get their fill of entertainment on the big screens as Ammy Virk & Sonam Bajwa starrer Puaada hits cinemas worldwide!! The film is all the rage with the youth and family audiences, the trailer of the movie touched 1 crore views and the songs have done more than 2 crore plus views!! So much is the craze for the film that several shows have sold out in advance already and cinema chains across the globe are adding more and more screens to keep up with the demand!!

Puaada is having the biggest release for an Ammy Virk & Sonam Bajwa starrer outside of Punjab in India and also in the overseas markets, says Ammy “this film has the perfect dose of desi and urban content to appeal to all types of Punjabis settled everywhere!” Puaada is a comedy romance family entertainer where Sonam Bajwa’s character challenges Ammy’s character every step of the way, Sonam says “I enjoy playing strong female characters, and the character of Raunak in this film represents all the girls of today from cities to villages who will do whatever it takes to stand up for what they believe is right.”

With its wide appealing trailer and songs, and the pent up demand for audiences worldwide the producers feel encouraged, says producer Atul Bhalla “people have been sitting in homes for a long time now and everyone is looking for good entertainment to provide them good laughs and relief and we promise you Puaada will give you just that.”

This is the same team that has brought the previous mega laugh riot Shadaa starring Diljit Dosanjh and Neeru Bajwa, and this time to the producers are looking to tap those same audiences with this colorful comedy, says producer Pawan Gill “as a production house it’s always our endeavor to produce widely appealing content, and the widest possible entrainment for Punjabis is a comedy with romance and after Shadaa we have now tried to give audiences all that but with a twist.” What exactly is this twist or Puaada we can now find out by heading out to the nearest theatres and getting our fill of entertainment.

Actor’s Ammy Virk and Sonam Bajwa are leaving no stone unturned for the promotions of this film, they have relentlessly been promoting the film on their social media handles and it seems like audiences just can’t wait for its arrival in a big way!! So much is the excitement for this movie that rather than the usual Friday release the makers have opted for a Thursday release and we just can’t wait to get our favorite tub of popcorn and head back to the cinemas. Puaada releases worldwide on August 12, 2021.