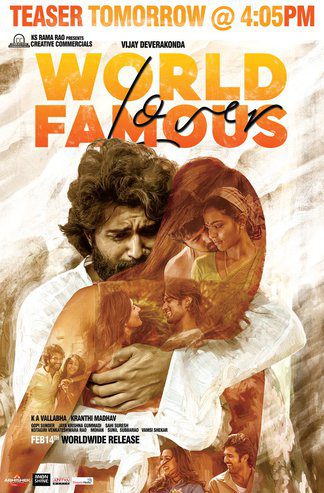 Vijay Deverakonda fans can rejoice as his next World Famous Lover’s teaser will be out tomorrow at 4.05 PM. The actor took to his Twitter handle to share the new poster as well as announced the teaser. He wrote, “Tomorrow,4:05 PM. Teaser. #WorldFamousLover.” Fans were quick to comment as soon as they learned about the new poster and teaser release time. One of the fans wrote, “#WFL gonna be the most favorite of 2020  Dying to watch in theaters …..

In the poster, we can see the actor in pain as he hugs one of the lead actresses of the movie. The poster also hints about his love journeys with other female leads. For the unversed, the movie sees not one or two but four actresses. Raashi Khanna, Aishwarya Rajesh, Catherine Tresa, and Izabelle Leite were roped in for the movie.

Speaking more about the movie, the shooting of the drama was started last year in Hyderabad and the Dear Comrade star is apparently playing the role of a Gautham, who is a traveler. Directed by Kranthi Madhav, the music of the film is given by Gopi Sunder. The romantic drama is produced by K. A. Vallabha under the banner of Creative Commercials and will release on 14 February 2020, Valentine’s Day. Aside from this movie, Vijay will be seen in Hero and Fighter.