We get really excited when we talk about Deepika Padukone or Priyanka Chopra or Nimrat Kaur starring in projects in Hollywood. But the film industry in the West is not lost out on Bollywood’s charm itself. A Hollywood star is all set to make her debut here in India with the upcoming comedy film, Total Dhamaal. You might remember the star from the hit movies like Hangover 2, A Night at the Museum and George of the Jungle. It’s Crystal, the monkey, we are talking about. Okay, maybe starting the article with Bollywood going Hollywood was not the best idea. But we are still excited to welcome this furry talent to our homeland.

The announcement was made by the producers of Total Dhamaal, Fox Star Studios on their Twitter handle with a picture of Crystal, the monkey, posing with Ajay Devgn. The post also reveals that the first trailer of the movie will be released soon. “Watch out for Crystal,” they added. Well, we will. Also, we are looking forward to Mungda Remake: Sonakshi Sinha and Ajay Devgn Continue the Trend, Try to Recreate Helen’s Iconic Song for Total Dhamaal.

Honoured and looking forward to recreate the iconic #Mungda with @ajaydevgn. My second song of lovely Helen aunty this year, hope she loves it too!!! Watch out for #TotalDhamaal in cinemas on 7th Dec.! @indra_kumar_9 @foxstarhindi @ADFFilms @ManglMurtiFilms pic.twitter.com/irZQpbaN68

As per an earlier tweet by Ajay, the newest entry – third in number – in the Dhamaal film series will be heavy on VFX. The extensive VFX also made the producers push the release date of the movie from December 2018 to 22 February 2019. We are eagerly looking forward to this Indra Kumar directorial.

'83 is one of the most awaited movies of the year and Ranveer Singh has been teasing about the movie of late by unveiling...
Read more
Bollywood

After Shakuntala Devi, Vidya will be seen playing a forest officer in the production house's next venture, which will revolve around the controversial case...
Read more
Bollywood

For anyone who loves how Shashank Khaitan and Varun Dhawan together have given us an immensely enjoyable Dulhania franchise, here’s some great news. We...
Read more 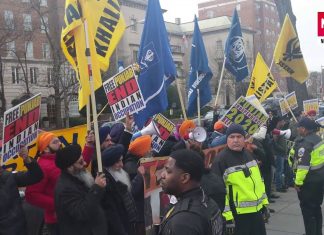 Umar John - January 26, 2019 0
This comes at a time when the Indian mission in DC received letters from Sikh organisations appreciating the efforts made by the Modi administration...