This comes at a time when the Indian mission in DC received letters from Sikh organizations appreciating the efforts made by the Modi administration to deliver justice to the aggrieved families of the 1984 Sikh riots.

The Indian Embassy hosted the 70th Republic Day on January 26 at the embassy, where Ambassador Harsh Shringla hoisted the Indian Tricolour.

The event at the Embassy took place without any disruption by anti-India fringe elements in Washington, DC.

The Indian Embassy in Washington saw a record turnout of members of the Indian community, with the Sikh community well represented.

An official said, “A record and unprecedented turnout of around 800 in a tiny space. The function went well with no attempts at disruption.”

It was much after the flag was hoisted that a small group turned up at the park across the road but were kept away by Indian students and community members present there. 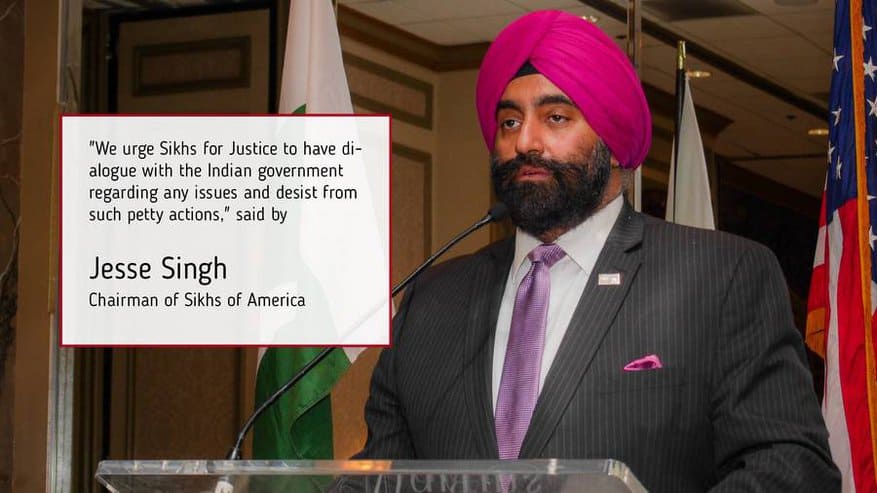 The flag-burning plan comes at a time that pro-Khalistan group Sikhs for Justice planned a ‘Burning of Indian Flag’ protest in the US capital and has also acquired the necessary permission to do so.

Community group Sikhs of America has called the act detrimental to peace and harmony.

“The Sikhs of America condemns and denounces in the strongest terms the planned burning of the Indian flag on India’s Republic Day outside the Indian embassy in Washington DC. Sikhs reside and have businesses all over India and a global presence. Such theatrical protests like flag burning are detrimental to the peace-loving and harmony-enhancing Sikh community everywhere,” the joint statement issued by Kamaljit Singh Soni, President, and Jesse Singh, Chairman of Sikhs of America, said.

“We urge Sikhs for Justice to have dialogue with the Indian government regarding any issues and desist from such petty actions,” the statement added.

The American Hindu Coalition also strongly condemned the plan to burn the Indian flag. In a statement, the association’s president Harsh Sethi, said, “The intent of flag burning is also an immense affront to the largest democracy on the earth and causing huge grief to the American Hindus.”

The statement also said that the entire AHC membership urged Sikhs for Justice to stop this act.

Speaking to India Today from DC, the local Republican leader and Sikh American Puneet Ahluwalia expressed concern over the developments.

“I am disturbed and concerned that a chosen few can build a narrative about the Sikh community in the USA which the whole world will view,” he said.

Suresh K Gupta, Chairman National Council of the Asian Indian Association (NCAIA) and president of Asian-American Inter Community Service, said, “I denounce this strongly and am outraged, at such behavior of others, in our community.”

This comes at a time when the Indian mission in DC received letters from Sikh organizations appreciating the efforts made by the Modi administration to deliver justice to the aggrieved families of the 1984 Sikh riots.

Kanwaljit Singh Soni, president of Sikhs of America, in a letter, said the recent court verdicts had restored millions of Sikhs’ faith in the Indian judicial system.

Puneet Ahluwalia said against these separatist organizations, “No democracy is perfect, but it is the conscience of liberty-loving citizens who should stand to protect and fight for it here and elsewhere. I am committed to supporting a strong secular, united India.”

“I understand that our nation’s constitution provides them freedom of speech. But I strongly believe that Sikhs, Muslims, Christians, and other minority communities are an integral part of India,” he added.