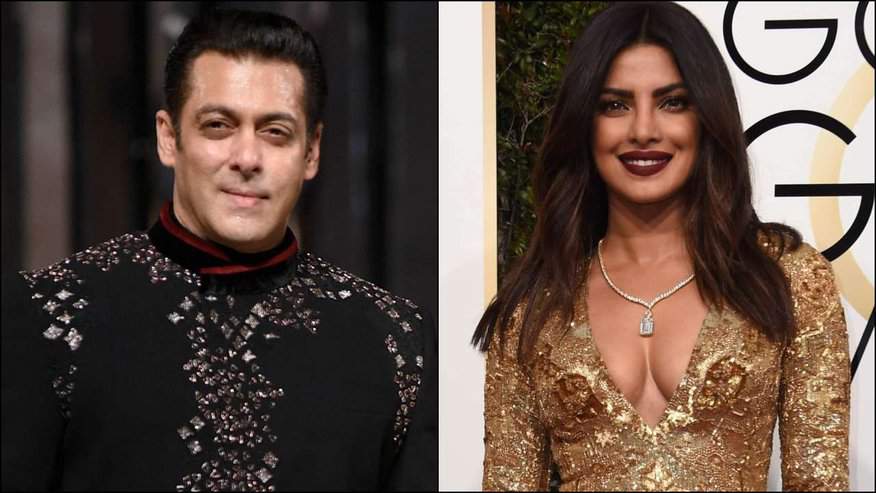 Bollywood superstar Salman Khan, who is currently on a promotional spree of his upcoming production ‘Notebook’ starring newcomers Zaheer Iqbal and Pranutan Bahl,

recently opened up on many things. The actor who will be next seen in his upcoming film ‘Bharat’ set to release in Eid 2019, has crooned a romantic number “Main Taare for the film ‘Notebook’. While interacting at a promotional event, Salman found it very amusing that Priyanka Chopra launched a dating app post her marriage to Nick Jonas.

Salman was quizzed about his upcoming love story in which two people fall in love without meeting each other and how likely it is to happen in today’s generation where it is all about meeting someone through dating apps. To this Salman replied that he doesn’t have any of those apps on his phone.

When asked about Priyanka Chopra launching a dating app in India, Salman was amused to hear that and jokingly said that why does Priyanka need that now considering she recently got married to Nick Jonas.

Salman Khan and Priyanka Chopra were supposed to star in the upcoming film ‘Bharat’ directed by Ali Abbas Zafar. However, the actress pulled out of the project a few days before the shoot was to start due to her wedding with Nick Jonas, after which Katrina Kaif was roped in to play the female lead. Since then, speculations are rife that things are not so good between the two actors.

For the unversed, Grindr happens to be a dating app that is basically meant for homosexuals. Moreover, another journalist from the crowd asked Salman about another dating app named Bumble to which Salman quickly replied by asking as to what is Bumble and who had launched the app.

When the journalists replied that it is Priyanka Chopra who has launched the app and asked for his further opinions, Salman amused everyone by replying that why does Priyanka Chopra need Bumble. Salman also revealed a lot of things about the upcoming movie Notebook where he is launching two new faces in Bollywood, namely Zaheer Iqbal and Pranutan Bahl.