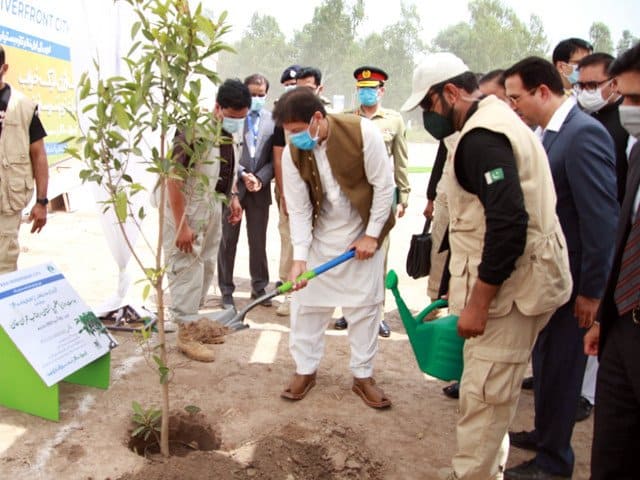 The prime minister was addressing a ceremony to launch Pakistan’s maiden smart forest sponsored by Huwaei near Sheikhupura under the Ravi Urban Project.

Speaking about the smart forest, Imran said that the growth of every plant would be monitored in collaboration with the tech giant and added that sensors will also be installed to discourage the felling of trees. The PM expressed confidence that the project would be replicated in other parts of the country.

The prime minister said the project would stop the flow of sewage into Ravi River as the untreated waste not only affects Lahore and its surrounding, but it also has repercussions for Sindh as Ravi, with its polluted water, eventually becomes part of the Indus River.

Imran maintained that the increase in forest cover will decrease temperatures along with addressing three major issues faced by the country i.e. water scarcity, the problem of untreated waste seeping into the ground and rivers, and pollution.

Speaking about the Pakistan Tehreek-e-Insaf’s (PTI) efforts for forestation in Khyber Pakhtunkhwa, the prime minister said the KP government planted 1 billion trees in five years (2013-2018) whereas the number of trees planted from 1947-2013 remained at 640 million.

The premier termed water scarcity, deforestation, and glacier melting the biggest environmental challenges for the country, and added that Pakistan as the country was one of the worst affected by climate change.

The prime minister said massive forestation was vital to save the country for the coming generations. “If we want to hand over a green and clean Pakistan to our next generation, tree plantation is the foremost solution,” he said.

During his address, the prime minister also recalled that Lahore, once known as the city of gardens, has turned into a polluted city with pollution touching hazardous levels. “Therefore, the Ravi project is not only important for Lahore but for the entire country,” he stressed.

He asked Chief Minister Usman Buzdar to remain undeterred in the face of challenges and work towards the timely completion of the project.

Buzdar and senior officials of the Punjab government were present on the occasion.

The government will also construct three barrages at the river along with filtration plants that will ensure the provision of clean water to the public, Imran added.