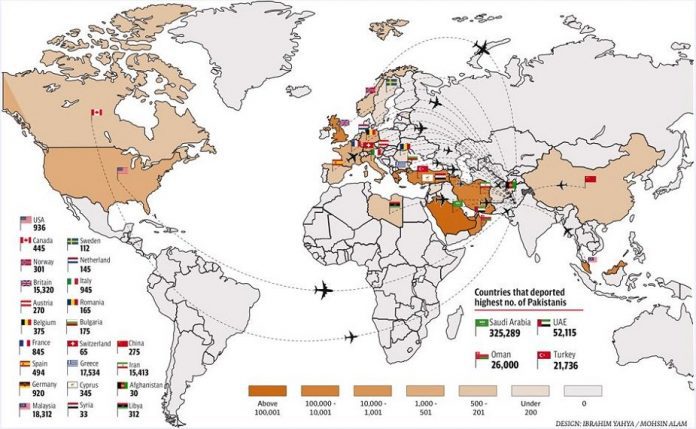 Globally, immigration has emerged as the most prominent wedge issue. And in a bid to please nationalistic voters at home, governments around the world resort to the deportation of undocumented migrants. Over half a million such illegal immigrants, deported during the last six years, hailed from Pakistan.

A total of 519,000 Pakistani nationals, deported from 134 countries around the world, returned with a long list of charges that include forged travel documents and a wide range of criminal convictions.Among the long list of countries, Saudi Arabia, UAE, Oman, and Turkey, took the top spot, deporting the most number of Pakistanis.

In addition to the expulsions, both Saudi Arabia and Turkey currently hold more than 65,000 illegal immigrants in deportee camps.According to statistics provided by the Ministry of Interior, the oil-rich kingdom has deported the most number of Pakistanis in the last five years.

Interestingly, Pakistani citizens also ended up being deported from war-torn countries such as Syria, Afghanistan, and Libya. The largest group of illegal immigrants was deported from Libya, which serves as a gateway to Europe. The North African country expelled more than 300 Pakistanis.Human trafficking is a global problem, affecting the lives of millions of people around the world and robbing them of their dignity.

Traffickers deceive women, men, and children from parts of the developing world and force them into exploitative situations in other countries. Traffickers often prey on people who hope for a better life, lack employment opportunities or, have an unstable home life.

Across Pakistan, the interior ministry has identified more than 1,000 groups for their involvement in human smuggling. These gangs actively lure Pakistani citizens into traveling to the Middle East or Europe, forcing them to work in farms and factories or even selling them for sex. In most cases, law enforcement agencies deport such individuals after a brief detention.

Nearly 2,400 Pakistanis detained in Turkey for illegal immigration.To prevent human trafficking, the Federal Investigation Agency (FIA), the top border control authority in the country, has established offices in Oman, Greece, and Turkey. Manned by officers from the FIA, National Database and Registration Authority (NADRA), and the foreign office, these offices work closely with the authorities in Pakistan to prevent cases of human smuggling.

The agency plans to open similar offices in other countries, including Malaysia and the United Kingdom.