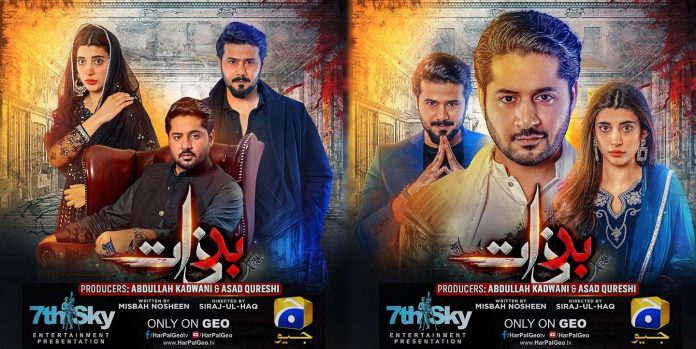 Abdullah Kadwani and Asad Qureshi are the producers of Badzaat, a 7th Sky Entertainment production. This Siraj-ul-Haque-directed and Misbah Nosheen-written drama features Ali Abbas as well as Mehmood Aslam and Saba Faisal as well as the voices of Nida Mumtaz and Zainab Qayyum, Sidra Niazi, Zoya Nasir, Sajida Syed, and Zohreh Amir as well as Danial Afzal and Anas Ali Imran.

Fans have been spellbound by the newly released OST for the television show Badzaat. Wajhi Farooki wrote and sang the song. Imran Ashraf, Urwa Hocane, and Ali Abbas star as the show’s primary actors. Love, hope, and unsolved tensions are all wrapped together in this story.

Imran Ashraf portrays a rage-filled guy who is the son of a dancer called ‘Badzaat’, a role that causes him to become aggressive. Confrontations that the character faces are shown in the teaser, which shows him reflecting on his history while also showing the formation of his current persona.