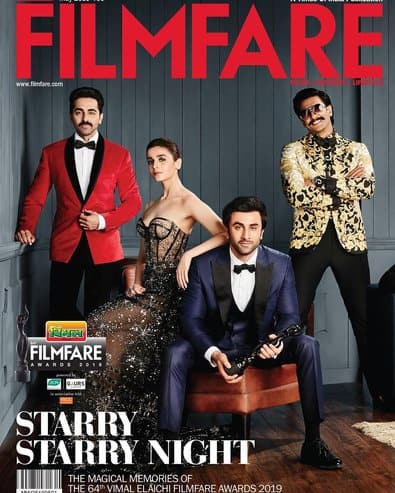 64th Vimal Elaichi Filmfare Awards 2019 was a star-studded affair. And Ayushmann Khurrana bagged the Critics Best Actor in a leading role (Male) for his role in ‘Andhadhun’.

Now, recently the actor took to his to share the latest cover of Filmfare which featured him with Alia Bhatt, Ranveer Singh and Ranbir Kapoor.
Along with the post, the actor added a humble caption. He expressed that maybe he came to Mumbai for the very same reason.

The 64th Vimal Elaichi Filmfare Awards was a starry affair with some of the finest performances taking the Black Lady home. One such performance was by Ayushmann Khurrana who bagged the Critics Best Actor in Leading Role (Male) for Andhadhun in which he played the character of a (maybe) blind pianist. The actor dedicated his award to his father who pushed him to be an actor, his mother who taught him the importance of being patient and wife Tahira who supported him throughout.

Recently, Ayushmann posted the latest cover of Filmfare on his social media handle with a humble caption saying that maybe this was the reason why he came to Mumbai. Ayushmann along with Alia Bhatt, Ranveer Singh and Ranbir Kapoor graced this cover of the May issue which brought together all the winners of 2019 in a panoramic view. Check out the cover right here and drop in some love for the actor in the comments.

Ayushmann will next be seen in ‘Dream Girl’, a romantic comedy directed by Raaj Shaandilyaa.

Last year, the actor blew away the audience and the box office with amazing performances in films like Andhadhun and Badhaai Ho, with his ‘Dilli ka launda’ act working out perfectly for him. So far, 2019 also looks solid for him. Ayushmann will next be seen in Dream Girl which will be a romantic comedy directed by Raaj Shaandilyaa.The film will also be starring Nushrat Bharucha and will be co-produced by Ekta Kapoor and Shobha Kapoor under their banner Balaji Motion Pictures.